Naughty coverlines? Only in your mind 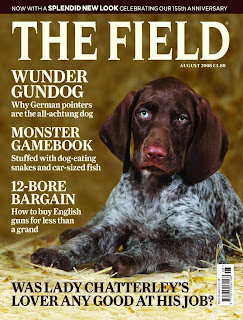 Writing intriguing coverlines is a highly developed skill at magazines. (Once we knew an editor who picked the cover shot and wrote the coverlines first then arranged for a paragraph item somewhere inside to justify running them.) No magazine is immune to indulging in a little hyperbole or misdirection in its cover lines. After all, we want people to pick up a newsstand copy and buy it and we want subscribers to be intrigued enough to pick up their copy and open it. It's called readership.

Well, The Field is one of Britain's most venerable magazines (founded in 1853) -- a heretofore somewhat stuffy title favoured by toffee-nosed gentry and hunting and hounding folk in the home counties -- and it has recently had a makeover. Nothing dramatic by most magazines' standards, but quite a departure for The Field.

Editor Jonathan Young said: “The design team’s brief was to create the effortless elegance you see in a thoroughbred horse and a Purdey gun, where less equals more."

The August issue not only unveiled the new look, but carried a cover line that said: Was Lady Chatterley's Lover Any Good at His Job? We know what you're thinking, and you'd be wrong. According to a story in the UK Press Gazette, the magazine has asked the experts to analyse D. H. Lawrence’s Lady Chatterley’s Lover, but to ignore the "rude bits" and instead give their verdict on gamekeeper Mellors’ skills with game birds, rather than his affair with Lady Chatterley.

“Personally, I’m not sure I’d give him a reference,” said Young.