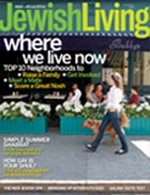 The current issue of Jewish Living magazine has an image of a woman walking along the street. The blog MyHogtown points out that the woman is Carol Moskot, the creative director of Jewish Living and the former art director of Toronto Life. Moskot and her husband Dan Zimerman moved to New York last year to launch the magazine. The cover feature is about the top 10 Jewish neighbourhoods in North America, one of which is the McGill Ghetto in Montreal.
Tweet

I don't really know how this is considered news. Anyone that has worked at any magazine anywhere knows that this happens all the time. Boring.