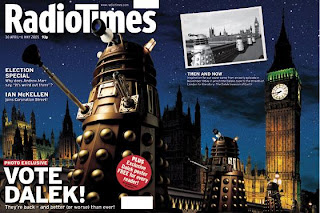 That it pays, sometimes, to take chances is apparent by the outsider win from Britain's Radio Times magazine in a cover competition held by the Periodical Publishers Association.( Of course it may also be an expression of a public write-in campaign on behalf of a wacky entry.) More than 10,000 members of the public cast ballots.

The May 2005 "Vote Dalek*" cover (shown above in its full gatefold), by was up against 50 other magazines and then a shortlist of 16 that included Vogue, Time Out and Loaded, according to a story in UK Press Gazette.

Editor Gill Hudson was accompanied by a Dalek when she collected the award for winning the Great Cover Debate at a PPA Magazine Week event. She said: "I think in the magazine business we’ve got to remember that we’ve got to be creative, we can’t play it too safe."

The cover concept played off two events: the runup to the general election and the return of Doctor Who to TV for the first time in 20 years.

"The combination is really funny [said Gill], you wouldn’t normally put the two together but the timing was great. What’s really nice about this is that a lot of people probably assume this is just a computer job, but we did it properly. You can see the extra effort has lifted it to something special.”

The cover, which pictures a Dalek on Westminster Bridge with the Houses of Parliament in the background, was recreated from a photo taken in 1964, found by art editor Paul Smith.

The team smuggled an old Dalek onto the bridge to take the photo at exactly the right angle, then took a trip to the TV studios in Cardiff where the new-look gold Dalek was being kept under lock and key and took a photo which they then superimposed on top.

[*For those who are not or never have been fans of the television program Doctor Who, Dalleks were a malevolent mutants in machine-like armour whose every moment was devoted to exterminating living creatures they consider inferior to themselves. As an aside, the original Doctor Who was developed in the early '60s by a Canadian, Sidney Newman, who was the BBC Head of Drama at the time.]
Tweet