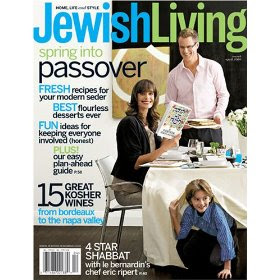 Since this blog has written several items in the past about the launch of Jewish Living magazine, we feel under some obligation to report, with regret, that publication of the magazine has been suspended after five issues, according to a posting on magazine's website.

Publisher Dan Zimerman who, with his wife Carol Moskot as art director (formerly of Toronto Life magazine), moved from Toronto to New York to launch the magazine, wrote to subscribers that, although the magazine was named one of the top launches of the year by Media Industry News and had made headlines, it wasn't enough.

Jewish Living was fortunate to have attracted a significant subscribers base, committed advertisers and the respect of the editorial and creative community.

However, given current economic conditions, it has become increasingly difficult to ensure sustainable funding and therefore the ongoing viability of the business.

she's needed back at Toronto Life, the covers have been lifeless.

This is strange. They spent 7+ years planning and financing this operation and then five issues in - pfffft. I'd love to hear the inside scoop.

Interesting that in late August they sent a letter to their charter subscribers with the offer to renew early and get two free issues! I'm glad I didn't write the check!

funny.. says Dan wrote to subscribers. I'm a charter subscriber and have all 5 issues. Never heard from anyone at the magazine. Paid for 2 years. Some communication would've been nice. I just found out and it's December.

I did send a check to renew for two years and am now out the $29.95. I tried several times to contact Dan and Carol and was first told that they were trying to find a substitute magazine; then nothing. I'm extremely disappointed that they didn't at least return the money that had been paid in good faith.

I paid for two subscriptions and my mother bought one as a thank you to a friend. We received no letter to subscribers and of course no money back. They need to do the right thing so we can say they "folded" instead of saying that they took innocent people's money and faith.

It looks like magazines are going to way of the dodo bird. Pretty soon newspapers will do the same.