The Atlantic puts one over on its readers 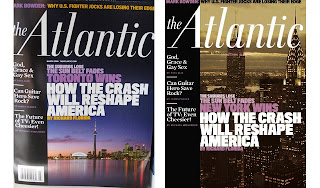 Who's The Atlantic trying to kid? Its March issue has a cover story by Richard Florida on How The Crash Will Reshape America. But there is a secondary coverline and cover pic that says "Toronto wins". However only in Canada and only if you don't know that elsewhere it says "New York wins". (And similar coverlines and local photos are used in copies sold in Chicago and San Francisco.)

Since the story barely mentions Toronto, this is sharp practice of a high order. The Globe's James Adams calls it "chicanery". If I were someone who'd paid $6.95 for the magazine and found this bait-and-switch, I'd be seriously annoyed. [Thanks to Torontoist for side-by-side cover photos.]
Tweet

Well, if you do buy the "Toronto Wins" coverline issue, you do get a pix of Toronto skyline. Presumably Frisco and Second City citizens would also have local pix...Wonder what the "national" US edition of Atlantic looks like...

To think, I almost purchased the magazine based on the cover.