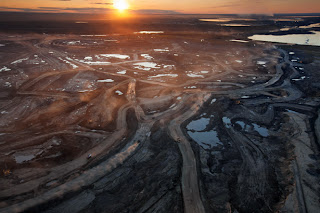 The current issue of National Geographic magazine may do more than all the thundering protests from environmentalists to put a stake through the heart of the Alberta oilsands. According to a column by National Post columnist Don Martin in the Vancouver Sun, the lavishly illustrated article is a public relations disaster.

This photo shoot for the magazine's influential global audience is described as the "baby-seal moment" for Alberta's oilsands, a public relations hell equal to a seal pup's skull-clubbing death that no amount of damage control can overcome, no matter how reasoned the argument.

Alberta's man in Washington, D.C., received an advance copy of the article earlier this month. He rushed it to Premier Ed Stelmach's office. The government spin doctors in Edmonton searched the 24-page spread, entitled "Scraping Bottom," for a glimmer of positive coverage, but the only rainbows they found were caused by oil slicks.