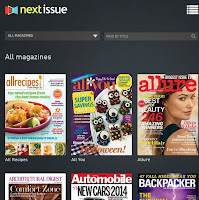 A couple of years ago Brian Segal, then the president of Rogers Publishing, said on a public stage how he admired Next Issue Media  in the U.S. and thought that it was pursuing a business model that might work for mainstream magazines in this country, and Rogers in particular.

Next Issue was a joint venture formed in 2009 by five leading U.S. publishers -- Condé Nast, Hearst, Meredith, NewsCorp, and Time Inc.-- a digital subscription service that offered unlimited access (only in the United States) to online magazines for a monthly flat fee. (It's sometimes called the "Netflix of magazines".)

Now it has been announced that Rogers has joined as a partner with the U.S. enterprise and has created Next Issue Canada  . And it would seem it is so committed to the idea that Ken Whyte has been appointed president of the new venture, relinquishing his role as head of Rogers Publishing Limited and its consumer and b2b magazine portfolio. He had been named to the job in June 2011, succeeding Segal, after a steady rise.

Whyte and Melissa Rogers (daughter of the late owner of the company Ted Rogers) will take seats on the board of Next Issue. A story in the Globe and Mail quoted Whyte as saying Rogers had made an "eight digit investment" and was an equal partner in the venture. The U.S. partners will see it as a way of gaining access to all of Rogers's digital channels through its broadcast, sports and other internet properties.


"The Next Issue platform is the future of magazine content consumption. It was the first all-you-can-read subscription digital magazine service, serving up the world's best magazines in a format that enhances what readers love about magazines: the sensory experience, the stunning visuals, in-depth content and the discovery of the unexpected," said Whyte [in a release]. "Next Issue Canada delivers added value with an all-you-can-read experience. It retains the best of print while making the content come to life vividly, giving readers a more personalized, interactive experience. As a result, the magazine of today is even more powerful than the magazine of yesterday."

In the release, Rogers said the exclusive partnership with Next Issue Media would be made available free for a two-month trial exclusively to Rogers wireless and cable customers on tablets (iPads, Android devices and starting October 15; it would then be rolled out to all Canadians December 15 and give subscribers unlimited access to more than 100 Canadian and U.S. titles for one monthly payment of $9.99 for all monthly magazines ($14.99 for all weekly publications such as Maclean's). And Rogers titles will be available to U.S. Next Issue subscribers.

Initially, Next Issue Canada will be an English service, with a French version to  follow in 2014.

It remains to be seen how quickly digital editions will be taken up by Canadian subscribers. Right now, the three leading titles are Canadian House & Home with 11,000, Readers Digest with 6,700 and Maclean's magazine with 5,600 (less than 2% of its print and newsstand sales).