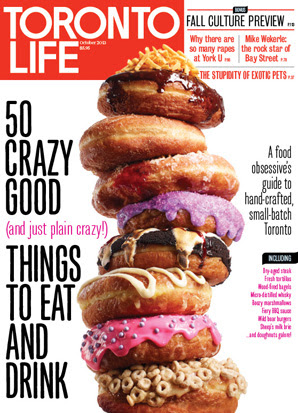 York University has served notice for defamation against Toronto Life magazine over an article in the magazine's October issue -- now delivered to subscribers and available on newsstands -- which suggests young women students live in fear of sexual assault. The secondary cover line on the issue is "Why are there so many rapes at York U?"

The notice, which is preliminary to an actual lawsuit, names Toronto Life Publishing Ltd. and freelancer Katherine Laidlaw, who wrote the story.

A statement from York president and vice-chancellor Mamdouh Shoukri says the article presents "a wholly distorted picture of women's safety" on the campus, making "sweeping and misleading generalizations that foster an atmosphere of fear in the York community and beyond and cause undue reputational and other damages to the University."


"On its cover, the magazine suggests that York’s campus has been the site of a disproportionately high number of rapes. This is patently false.

"The article also characterizes the campus as a “hunting ground for sexual predators,” using language that is inflammatory and baseless.

"Distorting and misrepresenting facts may help to sell magazines, but it does nothing to address the serious issue of sexual violence."

Toronto Life Publishing Limited has declined to respond or comment.

Take it from a journalist who actually reads books about defamation case law (you don’t): What York University served was a demand for an apology and retraction. There is no “notice of defamation” as uninformed hacks (and J-Source teenyboppers) believe.

Also, without a copy of the actual demand in hand, your article is almost pointless. The demand must list the exact words deemed defamatory and why. I’m just wondering – wouldn’t that be of interest here?

York has got to be kidding. A lawsuit? Please.

I was wondering myself, as a somewhat greying journo recalling standard j-school education: Is it possible to libel/defame an institution? I thought only individuals had a right to launch a civil suit for being besmirched.
defamed?

I, along with Joe Clark, wonder if Canadian Magazines might have over-torqued this one...

York University sent a letter (which I have not seen) saying it felt it had been defamed. It may be that York would have to be satisfied with an apology or a retraction, if Toronto Life were willing to make one, which I doubt, in which case the university can pursue whatever other remedies a court would allow.

I thought it was extraordinary that the president of one of Canada's largest universities would publish such a statement. So, I reported it (after asking Toronto Life if it wished to comment or respond, which it declined to do.)

I'm not trying to pass my bar exam, here.

Yes, I know you're not practicing for the bar here, lol.

But it is an interesting question: If I say Corp XYZ is a lying, thieving, no-good schmuck of a entity, what can XYZ do?

If Joe Clark – or is that "Angry Joe Clark"? - is correct, and what Toronto Life received is a letter requesting an apology and retraction, that is indeed quite different from a notice of defamation. I know that Toronto Life received a similar request for an apology about four years ago, and the whole thing went nowhere in the end. My sense, and I'm not a libel lawyer, is that people send such letters so that they can publicly take umbrage over something damning written about them without having to go through with the expense and potential embarrassment of a civil proceeding.

When you say “angry,” I read that as “correct.”

There is no “notice of defamation.” We are not talking about a choice between two equal options, one of which York opted for. There is one course of action at the first stage if you believe you have been defamed: Demand an apology and retraction.

What is actually interesting is the contents of that letter. Something tells me the magazine won’t retract or apologize for anything, and that York will be suicidal enough to actually file a suit. That’s gonna be interesting.