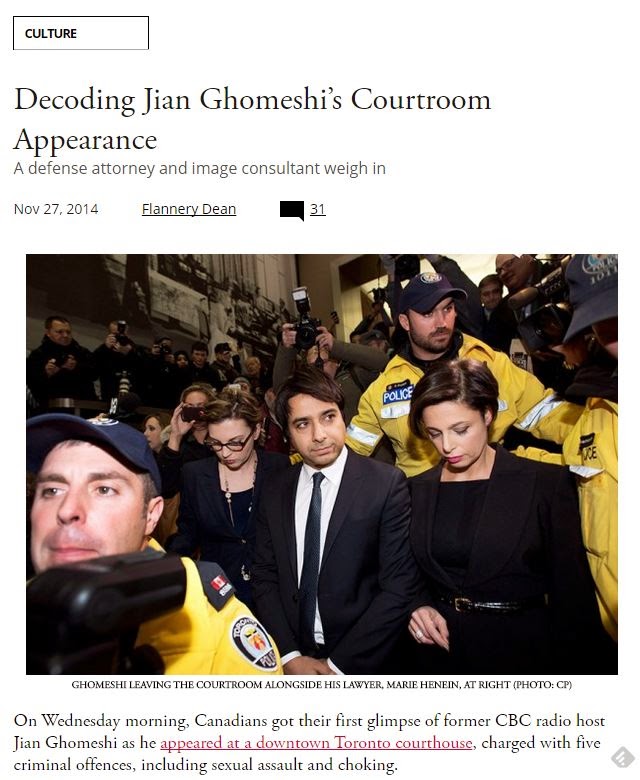 [This post has been updated] Readers of FLARE magazine -- or at least those who make online comments -- are seriously pissed that the magazine published an online commentary "decoding" the style choices involved in Jian Ghomeshi's courtroom appearance this week on sexual assault charges. The post, by Flannery Dean, talked about such matters as tie/no-tie, Ghomeshi's haircut and clean-shaven appearance and enlisted a defense attorney and an image consultant in the conversation. Here are some of the 31 comments:


"Shame on you. This is disgusting. What a callous attempt at news jacking. If you had any empathy for the several women who were ATTACKED by this PREDATOR you would yank this immediately and issue an apology."

"Your target demographic is women- you write about fashion, beauty and style, we get that; but his targets were also women. Having more respect for your target demographic would have been the smarter move when considering this article. Make considerate editorial choices, Flare. Don’t insult your people!"

"Is this for real? Your magazine has become a joke if so. Disgusting. I will never be picking up another issue again…nor visiting your site. I hope you guys go bankrupt. With this, you should be well on your way."

"Though I’m sure Flare’s enjoying its moment of attention, take this down already. Then fire whoever thought this was okay."

[Update: FLARE put an apology on line Friday afternoon (on Twitter and its website) by managing editor Maureen Halushak saying, in part that original headline, seen above, "misconstrued [the story's] intention, which was to discuss the strategy behind Ghomeshi's choice in apparel. This article was in no way intended to be seen as a light-hearted fashion commentary."