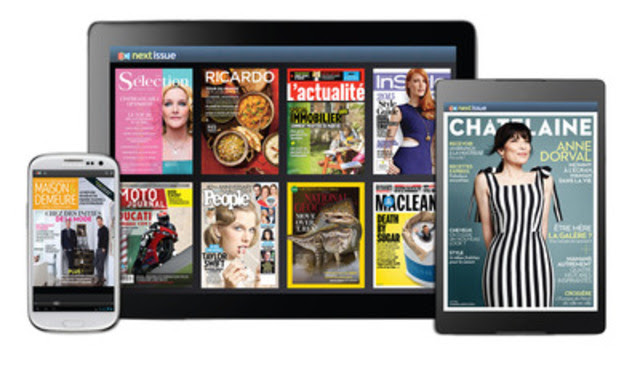 For the first time, starting April 20, Rogers is launching a French version of Next Issue Canada, the digital magazine newsstand. It will feature an all-French interface with more than 20 Quebec-based French magazines and access to more than 100 English titles (the French titles will continue to be available in Next Issue in English).


"With Next Issue now available in both French and English, we're committed to reaching more content lovers across the country and continuing our investment in the digital future of the magazine industry."

The Next Issue app will now be downloaded in preferred language device setting, and for popular mobile products including Android™ tablets and smartphones, and iPad®, iPod® Touch, iPhone and Windows 8 devices (English service only for Windows 8). As with the English service, one account is shareable across five devices and the service is available at $9.99 per month for all monthly and bi-weekly magazines and $14.99, subscribers including access to all weekly publications with back issues included. Next Issue Media is a joint venture of six leading U.S. magazine publishers - Condé Nast, Hearst, Meredith, News Corp., Rogers Communications, and Time Inc. Next Issue Canada. launched in 2013, is a joint venture with Rogers and Next Issue Media.