University Affairs magazine was named magazine of the year -- professional. The magazine also won gold for best professional article and art direction of an opening spread or complete feature and a silver award for best issue. Published by the Association of Universities and Colleges of Canada (publisher Christine Tausig Ford, editor Peggy Berkowitz, art direction by Underline Studio) the jury said of it:


"The grid brings interesting rhythm to the magazine, thanks to the bilingual content and the diversity of the visual features. Thoughtful and astute editorial choices are reflected in the illustrations, typography and the conceptual photography. The magazine is well-organized, young, diversified, current and bold, and features a harmonious balance of visual elements and editorial content."


"This magazine knows that its readers are not only grocers, but also people. The publication features a nice mix of short and long reads, profiles and big-picture features presented in engaging layouts with loads of entry points" 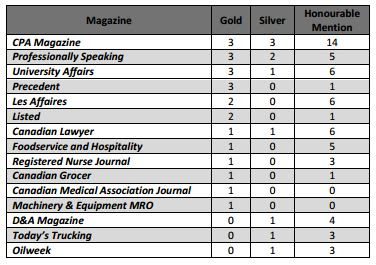 The gold award for best issue went to CPA Magazine, The Money Issue (May 2014), and University Affairs won silver for their Right to be Safe Issue (November 2014).

In the category of best cover, the gold medal was awarded to Foodservice and Hospitality (TheFood Issue) and the silver medal to Professionally Speaking (On the Road to Great Nutrition).

Among individual award winners there was a tie for gold for best profile of a person, awarded to John Lorinc in CPA magazine and Valérie Lesage for her profile in Les Affaires. There was another tie, this time for silver, in best feature article -- trade, won by both Carmelle Wolfson, OHS Canada and Leah Lawrence in Oilweek.
Complete list of winners and links to winning articles