Chatelaine: The Big Dish aims at women and
food culture


"Chatelaine: The Big Dish brings together two things at the very heart of Chatelaine's identity: championing Canadian women and really good food," said Lianne George, editor in chief, Chatelaine. "This event will serve as a platform for the many talented, creative women working in the industry – as well as those who are deeply interested in the subject of food – to connect and share ideas about everything from food trends and production to entrepreneurism and culture. And, of course, to eat."

Tickets for the day are $199 plus HST, which includes all food and drink, access to all keynotes and panels and networking opportunities and sponsor giveaways. The event is at 99 Sudbury near Queen St. W and Dufferin St.

The Canada Periodical Fund is going to continue to be the principal support for Canadian magazines and paid community newspapers, according to a speech by Heritage Minister Mélanie Joly. The announcement is one result of the comprehensive review of federal cultural policy and support for creative industries. It's something for which Magazines Canada has been lobbying.


Minister Joly signalled that the federal government recognizes the important role Canadian magazines play, both culturally and economically, and that Canadian Heritage officials will pursue their work to review and modernize the Canada Periodical Fund, all the while continuing to support the Canadian magazine sector.


"Whether they provide a guide to your own city or bring new intelligence to trade professionals, Canadian magazines build communities of readership that are unique and very important," said Scott Jamieson, Magazines Canada board chair. "Serving a geographic or linguistic group, focussed on an artistic practice, delivering entertainment and news, or exploring sexual identity, Canadian magazines' communities of readership are as diverse as Canadian society itself."

Advertising Age, the U.S. bible of the advertising industry, is undergoing a complete redesign, not only its print edition but also its website. It becomes officially what everyone has called it for years -- Ad Age -- and will have a new look, logo, colour and palate, said a story in the New York Post.

The first issue on Monday will have a series of covers, including controversy-plagued NBC anchor Megyn Kelly and a trio of Facebookers including Sheryl Sandberg.

Braiker says the new Ad Age will feature a more contemporary aesthetic and (most crucially) heavier cover stock — a costly investment at time when many mags are reducing frequency.


Editor Brian Braiker insists there is plenty of money to be made from print pubs — even those with limited focus and niche audiences like Ad Age. Editor Brian Braiker says the redesign will transform the publication from a mere trade to a bona fide cultural must-read.


"This isn't merely a new look," an announcement said. "This isn't window dressing. This is a new Ad Age for a new advertising age. Things are moving faster every day. Which means they'll never be this slow again."

Magazines Canada is calling for maintaining a strong cultural exemption in the North American Free Trade Agreement , which is now being renegotiated.

"The cultural exemption in NAFTA is essential for the continued sustainability and growth of Canada's creative industries, of which Canadian magazines are proud to be a part," said Magazines Canada CEO, Matthew Holmes [in a release]

"Canada has a long history of ensuring that Canadian citizens are able to find and access Canadian voices and perspectives on a range of issues, whether politics and news, artistic practice or business insights. A continued cultural exemption provision in NAFTA is crucial in order to preserve Canadians' access to quality Canadian content—especially now that so much of what is produced elsewhere is only one click away.

The association says that Canada's nearly 2,700 business-to-business, consumer and cultural magazines contribute approximately $1.7 billion to Canada's GDP. Canadian magazines are produced in every province and territory across the country, and are published in 34 different languages.

Over three-quarters of Canadians of all ages read magazines: 60% of these read magazines in print-only, while 92% read via a combination of print and digital platforms, the association said. While the Canadian magazine sector recognizes print's legacy, it also drives digital innovation in media: offering Canadian content via the web, tablet, mobile, social media and video. The jobs that Canadian magazines create also support many other industries: from agriculture, finance and the professions, to journalism, information technology and the arts.

As part of Science Literacy Week, Owlkids, a division of Bayard Canada, publisher of chickaDEE and OWL magazines has partnered with the Natural Sciences and Engineering Research Council (NSERC) to launch the inaugural National Science Reading Day on September 20, 2017.

Young Canadians ages 6 to 17 and their classrooms are invited to devote a period of the day between September 19 and 21 to science readings, as well as to enter a Canada-wide contest celebrating National Science Reading Day. There are over $3,000 in prizes to be won, including four classroom prizes and five individual prizes consisting of magazines and books from publishers Owlkids, Simon & Schuster Canada, Nimbus Publishing, and DK Books.

National Science Reading Day supports the mandate of both Owlkids and the NSERC to promote STEM (science, technology, engineering, and math) to children and youth.


"Science books have the unique power to enlighten and captivate in equal measure kids of all ages," says Jesse Hildebrand, founder of Science Literacy Week. "They reveal the amazing discoveries and insights gained from great research and exploration done throughout all of history, and showcase that the best stories are true."

The Kit Compact comes out with five covers, from film to makeup and Gen Z 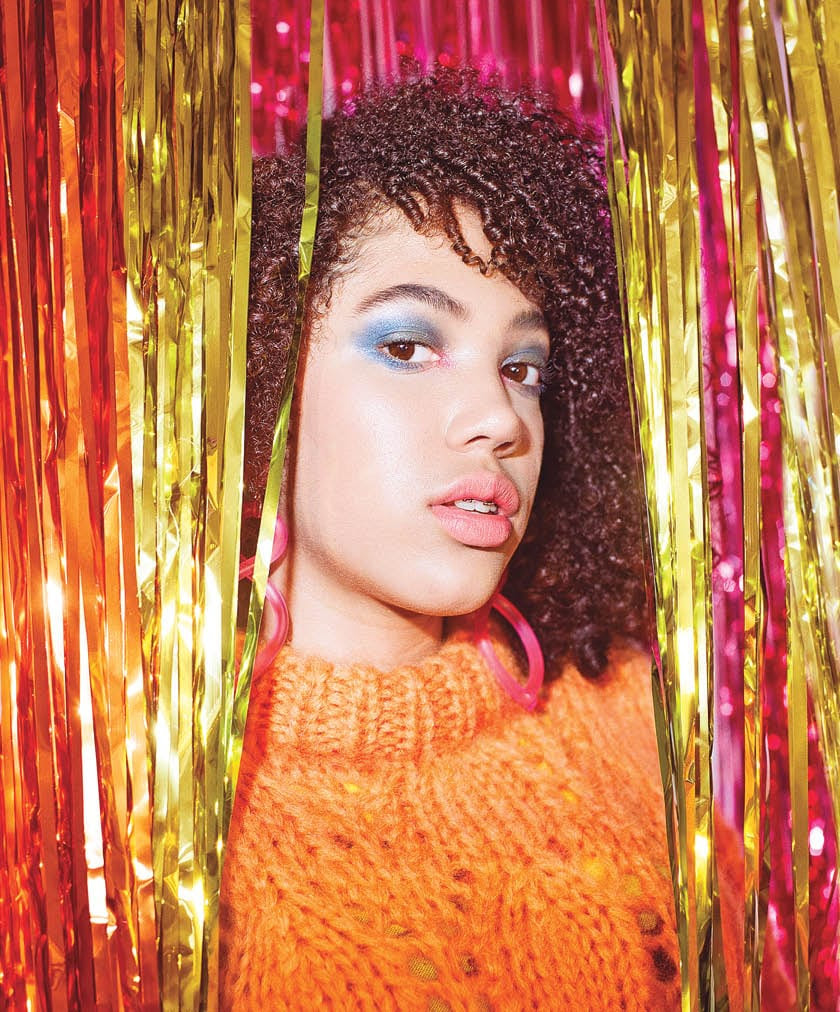 The Kit Compact's September issue is distinguished by having five covers, featuring Gen Z “Queen Bees”.  Copies of the five versions of the pop-up magazine are being given out in downtown Toronto (not at all coincidental with the TIFF film festival) and one cover selected for each additional participating city, including Calgary, Edmonton, Ottawa and Vancouver.


“Each image was so beautiful, we couldn’t choose just one,” explains Giorgina Bigioni, publisher of The Kit, about why five cover images were selected. “We had to showcase them all.”

This issue features talented Canadian women in film, a portrait series on young women and faith, and original fiction by a 16-year old author.


“The women we spoke to in this issue reaffirmed my belief in the power of hope,” says Laura deCarufel, editor-in-chief. “The believe they can do anything. I believe them.”

Helen Walsh is no longer the publisher of LRC, Literary Review of Canada. A story in the Toronto Star reports that she has been replaced on an interim basis by LRC board member Mark Lovewell. Supporters received a terse email from editor Sarmishta Subramanian that said only that the magazine "is launching a comprehensive strategic review and fundraising campaign to chart a course for the long-term."


Jaime Watt, head of Navigator PR and the chair of the LRC’s board of directors, did not provide any further comment but reiterated in a statement that the magazine is launching a strategic review.

The LRC was launched in 1991 by Patrice Dutil. Walsh took over as publisher of LRC in 1998 and introduced a series of public readings and talks. In 2005 she founded Diaspora Dialogues, an arts organization promoting the work of culturally diverse writers. More recently, she piloted Spur, a national festival of politics, arts and ideas. 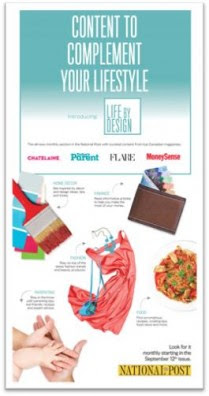 Rogers Media has struck a partnership deal with the Post Media Network to supply a monthly selection of content from its magazines for a special section called Life by Design.

There was probably some, or a lot of, scepticism out there when Melissa Kluger launched Precedent magazine, the Toronto-based lifestyle magazine for lawyers.
Well, it is about the celebrate its 10th anniversary, which is no mean feat. For its fall anniversary issue, senior editor Daniel Fish sat down with Kluger to talk about the magazine's origins. She was working in the law, but has always wanted to be a journalist.

"During those first few years as a lawyer, I started to read the existing crop of legal magazines. None of them spoke to me. On every cover there was an old white man. And, perhaps more importantly, there was nothing in them about how to be a young professional. Something was missing. So I thought, Damn it, I have to start a magazine."

She launched a blog and quit her job as a lawyer and spent the next year planning ( working part-time on doc-review contracts for lawyers to pay the rent.) The magazine started out strong, but almost immediately met several major obstacles: a recession, a competing magazine from Canadian Lawyer, and the move of traditional advertisers to digital. She overcame them all.


DF: "One big thing that has changed at Precedent [over the 10 years] is its mandate. When I joined the magazine, four years ago, this was no longer a magazine exclusively for young lawyers. Why did you make that change?"

MK: "I worried that once lawyers made partner, they’d put down the magazine and say, ‘That’s it! I’m done with Precedent.’ I didn’t want that to happen. I still want the magazine to skew young. It should promote emerging lawyers who wouldn’t have a place in other magazines, but the stories should appeal to everyone."

In July we reported that Halifax magazine was asking readers to pick their favourite craft breweries. If you're in the Halifax-Dartmouth area anytime soon, here are the five top makers readers chose:

2 Crows received the most votes, though it is the youngest (opened only at the end of January)
Tweet

No more EIC; Jessica Johnson named as executive editor and creative director of The Walrus

The Walrus Foundation has done away with the title and position of editor-in-chief and has instead named Jessica Johnson to the new combined role of executive editor and creative director of The Walrus magazine.

Formerly senior editor and creative director, Johnson will oversee art and editorial content on all print and other platforms and will join the senior management team.


“We’ve retired the role of editor-in-chief and have created a new role—executive editor and creative director—to reflect what the organization needs now,” said Shelley Ambrose, executive director of the Walrus Foundation and publisher of The Walrus. “As we approach the 15th anniversary of The Walrus in 2018, we are so lucky to have Jessica—a seasoned editor with eighteen years of broad experience in managing resources and people—already in our midst. Jessica has been and will continue to be a passionate steward for The Walrus brand as a whole while continuing to push this unusual animal in Canadian publishing to try new things, do more, do it better, to spark conversation, to provoke thought, to embrace what is complicated, and to ensure The Walrus remains best in class on all platforms.”

In May, Jonathan Kay resigned as editor-in-chief, a position he had held since October 2014, when he was appointed to succeed John Macfarlane.