Deadline for OMDC Magazine Fund is May 31

The deadline for the OMDC Magazine Fund 2018-19 is May 31, 2018 (by 5:00 pm ET). The Fund supports the business development of independent Ontario-based magazine publishers through the creation and implementation of new strategic initiatives that enable publishers to achieve business development and/or marketing objectives. Guidelines and the link to the online application portal.


The Emerge Media Awards were made on March 22, showcasing the achievements of student journalists from across Canada. Emerge was launched in 2015 as the first and only national post-secondary media awards program in Canada.


The awards, administered by the University of Guelph-Humber, recognize the best writing, editing, videography, audio, digital design, communications and public relations done at the post-secondary level. This year, the EMAs attracted more than 250 submissions from universities and colleges from coast to coast. The judging is conducted by an independent panel of industry representatives, including editors, broadcasters, producers, and other media professionals. [Disclosure: I was one of the judges.]

Time magazine, Fortune, Sports Illustrated, Fortune and Money were always an odd fit for Meredith Corporation when it took over the Time stable of titles from Time Warner Inc. And, as a result, they are up for sale, according to a story in Bloomberg,  Meredith is keeping People magazine, the most profitable. Other titles acquired include Real Simple and InStyle.

Meredith is planning to cut 1,000 jobs over the next 10 months as it consolidates what they are keeping with their existing flagships such as Better Homes & Gardens and Family Circle  and other titles (mostly entertainment, food, lifestyle, home, parenting,  beauty and fashion)


“That was the plan all along I think,” said Craig Huber, an analyst who follows Meredith at Huber Research Partners. “Meredith has never liked the weekly magazine business because the editorial content gets stale very quickly.”

Canadian Art magazine has published an unusual "Dirty Words" issue for spring. Poking fun at art-world taboos, the idea for the issue keys off a low-budget, Ottawa kids TV program called "You Can't Do That on Television", later syndicated on YTV in Canada and Nickleodeon in the U.S. The program was notorious, among other things, for dumping green slime on hosts whenever they said "I don't know.".


” Our “Dirty Words” issue is about the many, complicated concerns that inform the production of art. Much of the art reproduced here is text-based; some words in these works are traditionally profane." [says editor in chief David Balzer] "This is also an issue about what words can, and can’t, do. Words tend to be inadequate, as artist Jenny Holzer asserted in a well-known work—so why not use them to open dialogue and express uncertainty?"

St. Joseph Communications has tapped into the flyer business by creating a new distribution option that polybags flyers with a new editorial lifestyle magazine called Best Life. The company says people love their flyers; but the solution removes retailers from a cluttered delivery environment and gets their messages across a consumer’s doorstep via Canada Post delivery.


“We’re excited to present this new flyer delivery model for Canadian retailers that is cost-effective and provides a great consumer experience, tapping into Canadians’ affinity for flyers and high-quality editorial,” says Tony Gagliano, CEO of St. Joseph Communications. “Over the last 12 months, we have worked to develop and create the ultimate model that addresses what’s lacking in flyer delivery in Canada today: a compelling, relevant, targeted, differentiated, timely – and affordable solution.”

The first Best Life package will be tested with distribution in the London market on April 27.

Apple is buying Texture, the digital subscription service for magazines

Apple is buying Texture, the all-you-can-read subscription service (sometimes dubbed the "Netflix of magazines") that lets users in the United States and Canada call up digital editions of more than 200 magazines for a flat fee.

The enterprise, which started out as Next Issue Media, launched in 2012, is owned by a consortium of big U.S.-based magazine publishers (along with a $50 million chunk owned by venture capital company KKR.)

Rogers Media launched Next Issue Canada (later Texture Canada) soon thereafter, adding many Canadian titles to the menu offered to subscribers -- along with the U.S. titles. According to a story by Peter Kafka on Recode:


"Apple hasn’t disclosed a price but I’m told KKR will at least get their money back and that the publishers who started the company — Conde Nast, Hearst, News Corp and Meredith (which now owns Time Inc., another founder) — are happy with the deal."


“We are committed to quality journalism from trusted sources and allowing magazines to keep producing beautifully designed and engaging stories for users.”

[Apple doesn't usually announce smaller acquisitions, but apparently made an exception in this case because Cue was speaking at the South by Southwest conference this week in Austin, Texas.]

CPA Canada has outsourced the publishing of its award-winning magazine to Strategic Content Labs, the contract publishing arm of St. Joseph Communications.

The frequency of the magazine will be cut from 10 per year to six starting in May and it is said that the result will be more like the Harvard Business Review.

Magazine media's audience numbers are relatively steady, according to a report from Magazine Media 360. There is a -.5% decrease across the 118 magazine brands used in the analysis, but strong growth in video, up 13% from January 2017, and a mobile audience increase of 1.6%, according to a story from Media Post. Linda Thomas Brooks, president and CEO of MPA—The Association of Magazine Media, said


“Year-after-year, we continue to see total magazine media audiences grow, proving that consumers don’t choose one format at the expense of another, rather, they enjoy magazine content across platforms.”

Ironically, despite the fact that mobile audience numbers remain big and are growing annually, results have been erratic, largely because of comScore’s Mobile Metrix methodology changes to weed out bots and fraudulent activity.

Video audience was up 13% from January 2017; pPrint and digital numbers were flat, with a decrease of -1.7%, web (desktop/laptop) declined by -5.5%, signaling the migration to mobile.
Tweet 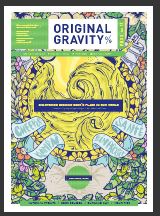 Original Gravity, a British quarterly beer magazine, is launching a Canadian edition in Toronto. The first will be the spring-summer edition coming out May 17, 2018. There will be three issues in 2018. Respected beer writer Stephen Beaumont will be editor-in-chief.


“Toronto has been crying out for a top beer publication for a long time,” says Beaumont [in a releae] “So when [publisher] Daniel [Neilson] approached me with the idea of launching a local version of Original Gravity, a magazine I have long admired on my visits to London, I leapt at the chance.”

“Original Gravity in the UK is a respected publication with an interesting angle that appeals to all readers, from the merely craft beer-curious to die-hard beer enthusiasts,” says Neilson. “As editor-in-chief, Stephen will bring his vast expertise and brilliant writing to the magazine.”

Featured will be Toronto-centric versions of columns popular with Original Gravity’s UK audience, including ‘The Art of Beer’ and beer style focused ‘The 6-Pack,’ as well as longer-form articles by Beaumont, Ontario Craft Beer Guide co-author Jordan St. John and others. Issue #15 can be read online now.
Tweet

LRC, the Literary Review of Canada, is after four years discontinuing Spur, its national festival of politics, art and ideas "due to financial considerations". Spur was launched on the watch of former publisher Helen Walsh, who left the publication last fall. LRC thereafter undert00k a strategic review, at least one outcome of which is the end of Spur.


"We want to thank you for joining us at these events and helping to shape important and dynamic Canadian conversations," [said a note from Sarmishta Subramanian, editor in chief of LRC.] "We continue to explore these issues in the pages of Spur's sister organization, the Literary Review of Canada, an award-winning monthly magazine about books, culture, politics and ideas."

Blue Ant Media of Toronto has announced the acquisition of Australian Geographic magazine from Bauer Media. The bimonthly is one of Australia's top 10 paid magazines, with more than 40,000 subscribers and a readership of 540,000.


“Australian Geographic is the most iconic Australian wildlife and nature publication, reaching a highly engaged audience of natural history fans through its multi platform content,” said Michael MacMillan, CEO, Blue Ant Media [in a release.] “The purchase of Australian Geographic reinforces our footprint in the Australian market while providing an impactful vehicle for showcasing the work of our natural history documentaries and series being produced all over the world.”