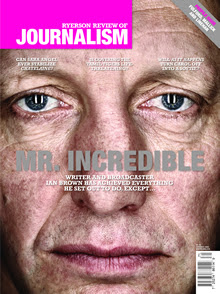 The Ryerson Review of Journalism has won five awards at the 2007 Association for Education in Journalism and Mass Communication Student Magazine Contest. Faculty member Bill Reynolds was advisor on all the winning pieces.

Consumer Magazine Article: Investigation and Analysis
( out of 26 entries)
: “A Wasteland No More,” by Amy Packwood

This is a hard-hitting examination of the surge in environmental reporting on climate change in the Canadian press. Interviews with veteran environmental reporters who have seen such editorial interest wax and wane in the past, set the current greening of the press in perspective. The writer of this piece exhibits a keen sense of skepticism, and a skill for complex analysis. The pressures on reporters and editors are examined in the context of the demands of science writing, politics, reader-interest surveys, editorial budgets, and other factors influencing the climate in a newsroom. The sources quoted are diverse and well chosen, the quotes are illuminating and to the point, and the analysis is cogent. This is a valuable piece of reporting, giving the reader a clear perspective on press coverage of a criticalcontemporary issue.

: “Staring Down the Tigers,” by Meena Nallainathan

The piece takes a very complicated subject—one even an informed reader might know little about—and makes it resonate almost immediately. The lede anecdote is very vivid; it’s elegantly relayed without being overdramatic. Throughout the piece, the writer’s presence is palpable, but not intrusive. The writer guides us through each journalist’s story skillfully and subtly and the pace of the story never slows. The reader comes away moved, informed, and thoughtful.

This was an ingenious conceit—writing the history of Reader’s Digest from the first-person perspective of the magazine itself—that could have fallen flat. But the writing here is so clever, humorous without being too cute or too hammy, and taut, that it works brilliantly. It’s a very smart, original way to deliver what could have a somewhat tedious recounting of a magazine’s history.

This magazine was Newsweek meets The Economist meets New York Times magazine. Very sophisticated but still youthful and modern enough to engage a younger demographic. Great use of illustration, and while some pages seemed a bit gray, they were still executed well. Vanity Fair’s pages are gray sometimes, too, but it doesn’t take away from the quality of the work…the same is true here.