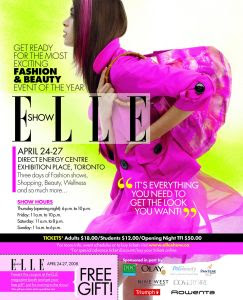 According to a story in Media in Canada, the show builds on the success of the brand's other initiatives, such as the Elle Beauty Grand Prix, an awards competition for the year's best beauty products as tested by the magazine's readers.

"The Elle brand connects with women on a very special level for fashion inspiration, beauty and health know-how and living life with spirit and style," says Elle publisher Jacqueline Howe, VP, Transcontinental Media. The fashion show "is a natural extension that brings a truly interactive event for Elle's audience while supplying the fashion and beauty industry with the opportunity to directly communicate live and one on one."

Opening night of the Elle Show will kick off with the "Toronto Fashion Incubator (TFI) New Labels" fundraising gala - a showcase and competition featuring Canada's emerging fashion designers that the brand has sponsored for the past five years. The winner will receive $25,000.

The power of being a multi-title publisher, as Transcontinental is, may best be demonstrated by the media blitz being used to promote the show: three pages of full-page ads in the April and May issues of Elle Canada, plus full-page ads in other Transcon publications: Canadian Living, Canadian Home & Country, Style at Home, Homemakers, MORE, Canadian Gardening, Good Times and Canadian Home Workshop. As well, seven quarter-page ads will appear in the Toronto Star and 10 full-page ads in Metro's Toronto edition.

Television spots will appear on HGTV as well as the Food and Life networks in a four-week campaign. Approximately 100 30-second radio spots will play on CHFI for two weeks prior to the fashion show, accompanied by on-air contests whose details are still under wraps.

Additionally, 150,000 postcards will be distributed by Elle Show exhibitors, sponsors and key retailers, some of which will also display posters. And 1.3 million inserts will be stuffed into Metroland community newspapers throughout the Greater Toronto Area. Online ads will appear on www.mochasofa.com, www.toronto.com and www.elleshow.ca, and links will be displayed on the sites of Transcontinental media magazines, sponsors and exhibitors.