Parsing your audience; Parenting mag
splits itself in two 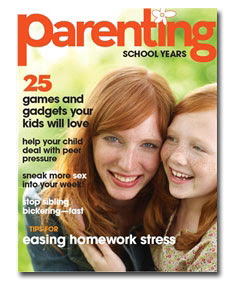 The U.S. magazine Parenting magazine is splitting itself into two, separate magazines, one for "early years", one for "school years", according to a story in Folio: (This idea resonates with yesterday's posting about Reader's Digest creating a second edition of Our Canada called More Our Canada. The "more" in both cases is followed, we presume, by the words "money" or "audience growth" or both.)

In the case of Parenting, the parts will still add up to the whole ratebase of 2.15 million -- 500,000 for the Parenting School Years and 1.65 million for Parenting Early Years. (Bonnier Publishing's Parenting Group also has magazines for the diaper-aged called Babytalk.)

“The issues of moms with school-age children, which differ significantly from those of moms with infants and toddlers, were not being addressed by the current offerings in the traditional parenting magazine category,” Walter Rosenthal, consumer marketing director, said. “By creating two editions that are highly relevant to the issues specific to each mom segment, we're creating a much more engaged reader.”

Rosenthal adds that separating the magazine into two editions will significantly increase the potential for audience growth. “School Years will give us the opportunity to extend the average life cycle of a Parenting subscriber, since we'll be able to market a new, more relevant edition to readers who might have otherwise let their subscriptions lapse once their children outgrew the traditional infant/toddler 'sweet spot' in our category.”

The idea makes a lot of sense, creating niches within niches, and acknowledging that (like magazines for seniors which have difficulty serving both 55 year-olds and 75-year-olds in the same book) there are substantial differences in focus and interest between parents of preschoolers and those with school-age kids. Presumably, Rogers's Today's Parent and St. Joseph's Canadian Family will both be looking at their publishing models to see what's in this idea for them. And if they look down the street, they can see it's already done in the children's segment, with Chirp handing on readers to Chickadee, then Owl.