It's a birthday that art directors and editors will wish to mark -- next Friday is the 20th anniversary of the introduction of Photoshop. The ubiquitous image manipulation software has been used for good in the magazine business (but also for some not-so-good purposes, including cover shot makeovers on fashion and celebrity titles. The example below shows actress Keira Knightly before and after.) 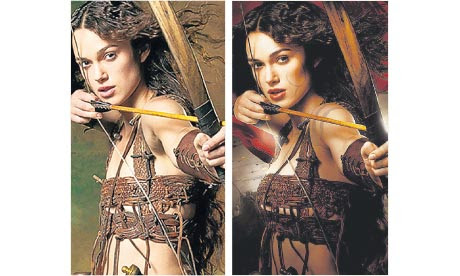 [photo: Splash News]
As Charles Arthur notes in an article for the Guardian, the proprietors of Photoshop (Adobe) decries use of the brand's name as a verb, but nevertheless it often is, usually as a term of abuse. And he points out that photo manipulation has always been with us.

But it was Photoshop that made ­altering images routine. It began ­circumspectly as a program written by Thomas Knoll, who, in the ­autumn of 1987, was doing in a PhD in computer vision but for fun wrote a program to display images with grey in them on a black-and-white monitor. Knoll called the program Display, writing it on his Mac Plus computer. Then his brother John, who worked at George Lucas's Industrial Light and Magic company, which did the visual effects for the Star Wars films, noticed its potential. They collaborated, bought a Macintosh II – capable of displaying colours! – and set to work; the program's name mutated until they hit on Photoshop.