Summer Brick gives away the endings of writers' favourite books 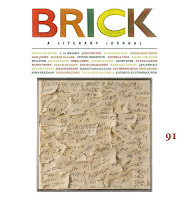 Rosebud was the sleigh. There. I am in good company with writers who give away the endings of their favourite books (and say why) in the summer blockbuster issue of Brick, which is available in bookstores and on newsstands at the end of May.

Inspired by a rousing conversation about endings at The New Quarterly’s 2012 Wild Writers Festival, editor Michael Redhill introduced the idea of including a “Spoiler Alert” feature in our Summer issue. Brick editors invited a number of writers to give away the endings of their favourite books and write about what makes a great ending. The response was astounding, and the editors have been delighted by the variety of ways contributors approached the subject and the thoughtfulness of their submissions. “Spoiler Alert” will feature writing by John Irving, Francine Prose, Sheila Heti, Colum McCann, Geoff Dyer, C. D. Wright, Marina Warner, Jan Zwicky, Lawrence Hill, and more.

The Summer 2013 issue (Brick 91) has sixty well known and emerging writers from around the world contributing including in-depth reviews by Di Brandt and Tom Mayer and essays by Kathryn Kuitenbrouwer, Isabel Huggan, Kilby Smith-McGregor, Toronto’s poet laureate George Elliott Clarke, and more. Editor and Governor General’s Award–winner Linda Spalding contributes a moving piece about a recent appeal in the murder case that inspired her to write Who Named the Knife.