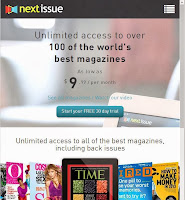 Next Issue Canada, after a two-month head start for Rogers service subscribers, is now rolling out its free 30-day trial of the magazine bundling service to the rest of Canadians. Thirteen of the 115 titles being offered are Canadian-published, all by Rogers (though it is anticipated other publishers will later join, as they do with the direct mail Rogers Subscription service.)
Unlimited basic includes access to 100 magazines for $9.99 a month; a premium service for $14.99 a month includes 115 titles, including Maclean's and Hello! Canada.

The service, which is a joint venture with a consortium of major U.S. publishers, makes magazines available on Apple iPad, iPad mini and iPhone, Android tablets and Windows 8 PCs and tablets, using a free app.

Next Issue was a joint venture formed in 2009 by five leading U.S. publishers -- Condé Nast, Hearst, Meredith, NewsCorp, and Time Inc.-- a digital subscription service that offered unlimited access (only in the United States) to online magazines for a monthly flat fee. (It's sometimes called the "Netflix of magazines".) Rogers joined as a partner in September.

Canadian titles on Next Issue: