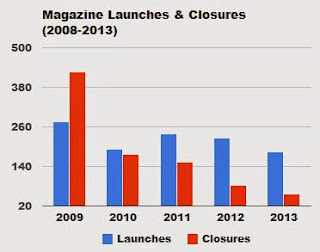 The North American magazine market in the first nine months of 2013 saw greater stability, according to a tally by MediaFinder which found that launches outnumbered closures by 3 to 1.  According to a report in Audience Development,

Both the 185 launches and 56 closures are 5-year lows for the industry, but the distance between them is steadily growing. The two were on par in 2010 (193 launches; 176 closures), while there were 3.3 launches for every closure this year.

Top categories were food, regional and women's, with sports titles showing the most closings. In b2b, 20 new magazines were launched with 14 closures.

MediaFinder is the largest database of U.S. and Canadian periodicals with 77,000 magazines, journals, newspapers, newsletters, directories and catalogues.
Tweet