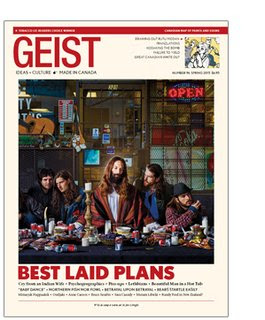 After 25 years as one of Canada's most successful  literary and cultural magazines, the reins of Geist have been taken over by a younger generation; the change was announced in a typically idiosyncratic Geistian way as "a bloodless coup" that displaced founders Stephen Osborne and Mary Schendlinger. Apparently Michal Koslowski becomes editor-in-chief, and AnnMarie McKinnon associate publisher of the Vancouver-based magazine.
Rather than try to paraphrase the announcement, here it is as distributed (there was a lot of boldface flourishes in the original, but they has been removed as unnecessary ornamentation):

A bloodless coup to usurp Geist’s founders, Stephen Osborne and Mary Schendlinger, was carried out by members of the magazine’s long-standing staff this April.

Resistance leader Michał Kozłowski, a writer originally hired by Geist in 2006 to change lightbulbs and stuff envelopes, succeeds Stephen Osborne in the roles of publisher and editor-in-chief. Osborne and Schendlinger, unfazed by the coup, were keen to recognize the new regime. “We’ve been waiting for this for a long time,” remarked Osborne. “Oh, I thought they had already taken over,” Schendlinger added.

After 25 years at the top of the Geist masthead, Osborne and Schendlinger have been relegated to Brain Trust and will provide publishing expertise and editorial support to the new regime.

Geist began publishing in 1990 as a newsprint magazine in the founders’ living room. In the quarter-century since, Geist has published more than 1500 Canadian writers and artists, has won some two dozen awards, including (three times) Magazine of the Year for Western Canada, has published writers who have gone on to win the Writers’ Trust and Giller awards, and has grown into the largest-circulation literary periodical in Canada’s history.

Kozłowski and his co-conspirators thank Osborne and Schendlinger for their capitulation and vow to carry on the Geist mission to combat miserablism, eradicate boredom and brutally repress mediocrity.

Before changing lightbulbs for Geist, Kozłowski painted fire hydrants for the city of Winnipeg. His co-conspirators include AnnMarie MacKinnon, associate publisher, a seasoned editor and formerly a private waitress to Alexander Graham Bell’s granddaughter in Cape Breton; Dylan Gyles, reader services, a former pin monkey at a Winnipeg bowling alley; and Roni Simunovic, digital publishing coordinator, who worked at the largest Tim Horton’s in Kamloops for about 11 months.

The usurpers’ first issue is Geist 96, out on newsstands this week.