It has been decided after a thorough review* that the Ryerson Review of Journalism is to continue as a multi-platform magazine, including an annual print edition. A note to readers from Ivor Shapiro, the chair of the Ryerson School of Journalism and the publisher says that there is a recognition that the Review is "a serious asset for students' career preparedness."

Occupying a lot of the conversation about what the RRJ should be like in future, the outcome was pretty much what might have been predicted. The loyal readers of the magazine want to see continuation of  the annual print edition as a sort of anchor tenant for a menu of digital offerings ranging across a variety of platforms such as social media, a digital edition, a blog, a podcast and a regular e-letter. In other words, it is not an either-or proposition, print or digital, but an "audience-first" approach.

Students value the RRJ as a laboratory for learning the business. The challenge is for Ryerson, its students and those loyal readers to find a consistent and sustainable way to pay for it. It means that more readers/supporters than the current roughly 300 subscribers need to step up. (As a canny slogan of The Nation magazine used to put it "It's not enough to just subscribe to our principles.") It also means that part of being on the staff will mean asking for those orders; expanding the magazine's audience and hustling for donations.

Among the expectations coming out of the review is that students on the RRJ masthead will now be given a set publishing budget made up by the school, part of the students' ancillary fees, donations and subscriptions and that the students will be expected to make their own decisions on how to grow and spend that budget. There will also probably be more collaboration between the RRJ and  the J-Source, produced by the Canadian Journalism Project and housed in the same offices right next door.

Readers of this blog know that I am a subscriber and have been a booster and proponent for the RRJ for a long time and that I think it is a very important venture holding the magazine and wider publishing business to account.  The annual does outstanding research, reporting and writing and if the people in this business know what's good for them, they'll see that it continues to do so. It's very much needed.

[*Disclosure: I was one of the people consulted during the review.]

Tom Gierasimczuk, publisher and GM Vancouver and Western Living, director of Creative BC

Creative BC, a non-profit organization launched in 2013 to promote creative industries in the province, has made a number of appointments, including selecting Tom Gierasimczuk, Publisher and GM, Vancouver Magazine and Western Living as a director. He'll be a voice at the table representing the magazine industry and, it would be hoped making sure that magazines receive their fair share of provincial funding.

Registration is open for the Alberta Magazines Conference and awards gala, March 3 - 4. Among the sessions offered are

Broken Pencil, the magazine of zine culture, is next week publishing an issue that features the Cripple Punk movement. The cover story is by Sidney Drmay, the coordinator of RyeACCESS at Ryerson University in Toronto. The cover shows (click to enlarge) rad disabled punk Kate Mokus. The movement speaks out for and represents the disabled in terms that we rarely see in mainstream magazines.

The Canadian Society of Magazine Editors (CSME) is having one of its occasional events on February 3; this time talking about the best free online tools that will save editors money and time and drive engagement with readers. Presenters will be Lauren Reyes-Grange, Digital Engagement Manager at Maverick, an integrated marketing communications agency that’s as smart as it is bold, and Graham Scott, a self-described “media geek” and Deputy Editor for Canadian Business.

[This post has been updated] Penthouse magazine, the raunchier cousin of Playboy, has decided to stop print publishing and provide its content only in digital format.

"Reimagined for the preferred consumption of content today by consumers, the digital version of Penthouse magazine will combine and convert everything readers know and love about the print magazine experience to the power of a digital experience," said FriendFinder Networks in a statement reported by The Wall Street Journal.

Men's or "lad mags" have found it almost impossible to compete with the adult content that can be found free online. Playboy, for instance, recently said it was discontinuing full nudity since anyone with a laptop could find more on the internet.

The move to digital means the closing of Penthouse's New York offices (moving to Los Angeles, hq of the FriendFinder Networks).

[Update: Penthouse says now that it is NOT discontinuing its print edition and that its announcement about the digital edition was misunderstood.

"To answer what was picked up in the press, obviously the mainstream press doesn't read down to the bottom of press releases," said managing director Kelly Holland. "We never suggested that we were stopping Penthouse's print publication."]


"In a perfect world, the women on our list would be household names. But for too long, history textbooks have focused on great men, to the exclusion of all others," editor-in-chief Mark Collin Reid said in a release. "Hopefully, this special feature will launch a broader conversation on outstanding women in Canadian history."

Among the women selected were
Readers are asked to vote for their favourite Great Woman and nominate others; all participants are entered into a draw for an original painting by Barbara Paterson, the sculptor of the "Famous Five" monument on Parliament Hill.
Kayak's special issue, aimed at 7 - 12-year-olds explores how women got the vote and features stories and comic book renderings of the story of McClung.

David Balzer, an award-winning author, critic and editor, has been named editor-in-chief of Canadian Art magazine, succeeding Richard Rhodes, who retired in December. Stepping up from five years as deputy editor and associate editor, he'll be responsible for all of the content platforms, digital and print, for what is Canada's most widely read art magazine.


“I am excited to continue my work with Canadian Art as editor-in-chief,” says Balzer. “We have a very talented editorial staff and they will be central to how I shape and direct the publication moving forward. My commitment is to intelligent but accessible coverage of contemporary visual art and culture, online and in print. I want to provoke conversation, and in doing so reflect the diversity and dynamism of the Canadian artworld, both nationally and internationally.”

“The New Republic has spent 100 years cheating death. There have been plenty of times in the past when it appeared doomed, then somehow skated to safety. Maybe it will again, There are still good stewards in the world and there are ideas-driven magazines that make a difference.”

-- former New Republic editor-in-chief Franklin Foer, responding to the announcement that Chris Hughes, the current owner, is throwing in the towel and putting the century-old magazine up for sale. Hughes said he underestimated the difficult of transitioning an old and traditional institution into a digital media company in today's quickly evolving climate.

The Canadian Business Media Awards in Memory of Kenneth R. Wilson (formerly the KRWs) has announced its call for entries, with a deadline of February 12 (early bird, Feb 8). Entries may be made in 30 categories, in most of which gold winners receive a $500 cash prize.

Seven new categories have been added:

The first Digital Publishing Awards from the National Magazine Awards Foundation are now accepting entries. Submission for the national, bilingual program, recognizing excellence in Canadian digital content are due by February 16. Finalists will be announced on May 4 and the winners announced June 9 in Toronto. According to the NMA release


Digital publishers with established brands in magazine, newspaper, broadcast and other journalism, as well as publishers that serve their audiences exclusively on digital platforms will be eligible to enter, including those that publish in either English or French.

For the inaugural year, creators and publishers will have the opportunity to have their work recognized at the national level in fourteen awards categories, including:

The finalists for the American Society of Magazine Editors (ASME) Best Cover competition has been announced, selected by ASME members. Members of the public can now vote for the People's Choice Awards. The New Yorker and New York are in the lead, with four nominations each.

February 1 is the deadline for entries in the Atlantic Journalism Awards (AJAs). Online entries are accepted from magazines as well as daily and community newspapers,  radio, TV and online media for work published in Atlantic Canada outlets.
There are 28 individual categories and three finalists are selected from each one by panels of judges from coast to coast.  Details of the category definitions, judges guidelines and entry procedures can be found at www.AJAs.ca. The awards will be presented May 7 at the Halifax  Marriott Harbourfront Hotel.
Each entry costs $65 and all but student awards are submitted online.
Magazine-relevant categories are:

Hearst Magazines saw a 50% increase in digital traffic in 2015, to reach an all-time high of 163 million unique visitors, according to a story in AdAge's FishbowlNY. These include

What to do about the newsstand? Publishers and everyone else want to know

The CMC is holding a seminar and social in Toronto Thursday Jan 28 about how to fix the newsstand. It's not the first time that the association has asked that or similar questions, but now it wants to confront the challenges of 2016.


What has changed in the industry that will help restore newsstand sales? Are promotions essential? What sell-thru rate should publishers expect and what can be done to increase this? When should a new magazine go on the newsstand and when should a magazine drop out? What can Publishers do to advance their products at the newsstand in today’s environment? How do we make ourselves more viable in the eyes of our retail partners? How do we protect and possibly grow our space at retail?

The panelists will be
The event is at the Minto Quantum South Tower, 2181 Yonge Street, Toronto from 3:30 to 5 p.m., with the social immediately afterwards. Free to CMC members. Non-members$25 for the seminar; $10 social only.

50 years of Toronto illustration being celebrated by exhibit at John B. Aird gallery 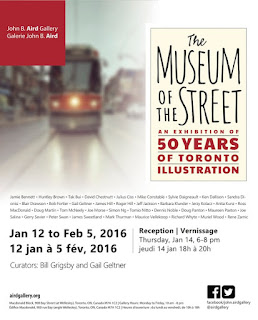 Readers of this blog know I have a soft spot for  illustration, particularly for magazines. So it's a pleasure to see that an exhibition The Museum of the Street: 50 Years of Toronto Illustration is being mounted at the John B. Aird Gallery January 12 - February 5. The opening reception is Thursday, January 14, 6-8 p.m.

The show features many well-known artists whose illustration work appeared and appears in Toronto-based and national magazines. I was fortunate to be editor of The City magazine (Toronto Sunday Star), a weekly that was art directed by Louis Fishauf (and, before him, Rob Melbourne) and which for a time commissioned a lot of spot and feature illustrations. Among them: Mike Constable, Sandra Dionisi, Blair Drawson, James Hill, Roger Hill, Jerzy Kolacz, Anita Kunz. (The year I was president of the National Magazine Awards, the poster was done by Blair Drawson.)

Curators of the show are Bill Grigsby (whose firm Reactor Art + Design is agent for many great illustrators, including many in the show) and artist and illustrator Gail Geltner.

That was the year that was: a look back at 2015 in Canadian magazines

Here's a (fairly arbitrary) rundown of links to some of the stories from the past year of the Canadian Magazines blog.