The results have been released of the first full-year study of Canadian consumer magazine and newspaper readership by Vividata and it demonstrates, not surprisingly, that magazine readership remains strong, with 70% of Canadian adults  reading magazines, comparable to levels of five years ago.  And the trend to reading on digital devices continues to grow.  Never before measured is that almost half of magazine readers are now reading on a digital device. 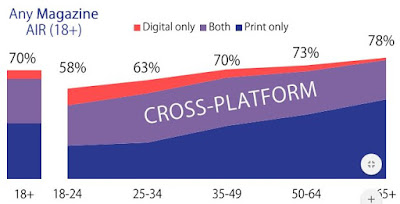 The research organization was founded in 2014 as an amalgamation of NADbank and the Print Measurement Bureau (PMB). The study results were based on the first full year of fieldwork of the combined organization, looking at 117 publications (73 magazines, 44 newspapers) in  a survey of 38,000 consumers across Canada from January to December 2015. The amalgamation was, at least in part, in order to allow measurement of blended and unduplicated readership results for both print and digital.

Among the other findings are that
The following are the current top 10 in English and French in total net print and digital readership in thousands:

Top 10 French ('000s)
[This post has been updated:  Earlier version had incorrect sort for top 10 French titles. Our apologies.]

Vividata overview of results and methodology for both magazines and newspapers.