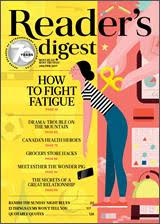 Starting with its January issue, Reader's Digest Canada will be spending a year marking its 70th anniversary.


“For close to seven decades—almost half as long as Canada has existed—Reader’s Digest has been telling stories about Canadians, by Canadians, for Canadians,” says Dominique Ritter, executive editor, Reader’s Digest Canada. “The magazine’s longevity is a testament of the brand’s connection with Canadians and it’s only fitting that we celebrate this special achievement all year long.”

There will be a monthly online feature called "70 Things..." that looks back at stories and interesting facts that Reader's Digest has brought to readers over the decades.

According to the most recent readership data (Vividata 2016 Q2), Reader's Digest ranked #1 for total print and digital audience, with over 4.6 million Canadians. Reader’s Digest Magazines Ltd. publishes Canada’s most-read magazine and Sélection, its French language counterpart. They have a total print and digital average issue readership of over 5.9 million. Other magazine brands include Best Health and More of Our Canada, a companion magazine Our Canada magazine. Reader’s Digest operates a network of branded websites in Canada, including Rd.ca, besthealthmag.ca and selection.ca.
Tweet