Saturday Night -- was this its ninth life? 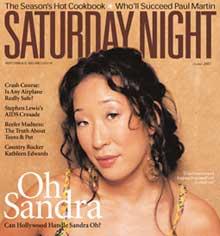 St. Joseph Media just killed Saturday Night magazine (October issue at right). Faced with the daunting task of weaning it off its controlled distribution through the dwindling National Post (the contract is coming to an end, anyway) and the extraordinarily expensive and difficult prospect of taking it paid, the company decided to discontinue it. This, despite the valiant efforts of Gary Ross and the Saturday Night staff to redirect and revitalize the franchise. It's a damn shame. And it seems highly unlikely that it will rise again (despite past experience).

“Despite a superb editorial product under the leadership of Gary Stephen Ross, advertisers’ support – although favourable – has not reached projected levels,”
explained St. Joseph Media President Donna Clark. “At this time we do not see a path to profitability for Saturday Night. Given our numerous growth opportunities and business priorities, we are placing Saturday Night on hiatus.”

Update II: Go here for a history of the magazine, appended to Mastheadonline's item about the magazine's closure.

what was so valiant about the job g. ross did? the screwing over of young, keen writers by getting them to write long features on spec and then do a new draft - and finally, of course, killing the piece without paying a nickel (after not returning phone calls and e-mails for weeks)? the instilling of a climate of uncertainty in a previously pleasant and creative work environment? filling an issue - october's i think - with nothing but flat profiles of largely uninteresting people? the fact that the mag died on his watch isn't entirely a coincidence.

Anyone else out there with such experience? Word is that work in progress for SN is to be paid at the kill fee rate.

This makes me so, so sad. Puts a bunch of excellent people back in circulation though.

hey i just remembered I gave them 20 bucks for a subscription at Word on the Street! I wonder what they'll do with us unfulfilled subscribers this time?

SN died years ago when it was someone's great idea to go controlled.

... that great idea was MVP's (Greg McNeil) - wanker! ... what goes around comes around sucka ... these people had a cultural responsibly to have furthered this vehicle and take a personal lose. St. Joe's had no business publishing it. They are interested in money... that's it.

Thanks for lowering the tone of the conversation. Had Greg MacNeil not picked it up, Saturday Night would have been dead long ago. Had St. Joseph not then put a lot of money into it (without much hope of return) it would not have increased its frequency, hired a new editor or carried on as long as it did. They do not deserve anonymous slagging.