Swerve is a relatively small 12-year-old magazine in Winnipeg which, by virtue of having steadily published its magazine for its gay, lesbian, bisexual and transgendered audience, might be presumed to have a copyright on the name and a lock on its audience.

However, there is another Swerve, a startup entertainment magazine that was launched last year in Calgary by CanWest MediaWorks Publications Inc., wants the name all to itself and has applied for a trademark to that end. The original Swerve is opposing the trademark application, but is daunted by the muscle of CanWest since fighting this issue all the way could cost as much as $30,000.

Richard Wood, the treasurer of Swerve One (as we'll call it) had assumed that he could just walk down the street to CanWest's Winnipeg HQ and work something out. “I took a small-town attitude that it was something we could just talk about and work out face-to-face because we were in the same block,” Wood recalled. “We were in the same city. We were both publishers. I never expected it would become a confrontation like this.” 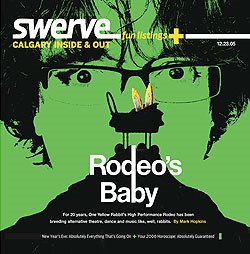 This David and Goliath story is detailed in Straight.com, the website of the Georgia Straight.

An interesting sidelight: Swerve Two, as we'll call it, won Magazine of the Year at the Western Magazine Awards in Vancouver last week.
Tweet