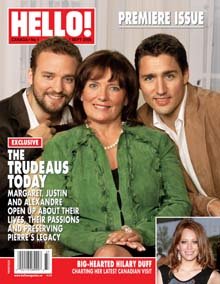 Rogers's Hello! magazine should be appearing on newsstands over the next few days. A story about it appears in the National Post today. Curiously, neither the publisher nor the editor is quoted, although Rogers's vice-president of consumer marketing, Tracey McKinley, is. Most of the story pivots around comments from Bill Shields, the editor of Masthead. Rogers announced last December that it would be launching a Canadian edition of the popular U.K. magazine, which is itself an English version of the Spanish original.

[UPDATE: Apparently, the "official" launch of Hello! Canada will be on September 9, in the midst of the celebrity-enriched environment of the Toronto Film Festival.]

[Further update: Thanks to the CBC website, we in the boonies now have a pic of the first issue.]
Tweet