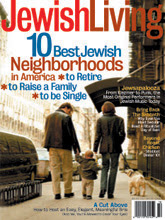 “Imagine if you took Martha Stewart Living, Oprah, Real Simple and looked at it through the lens of the (female) North American Jewish community. It’s a demographic that’s never been targeted specifically… an idea like this has never existed.”

The magazine is due to debut November 8 with the tagline: Celebrating Jewish Home, Jewish Family and Jewish Cultural Life.

Moskot recently led the redesign of Toronto Life and had consulted on redesigns carried out at Maclean's, Canadian Gardening and Canadian Home and Country magazines. Moskot is currently nominated for two National Magazine Awards in art direction at this year’s event in June.