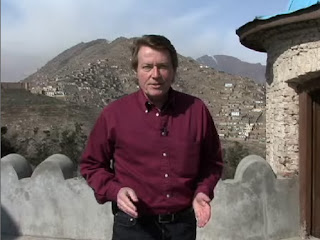 Policy Options magazine this issue publishes an article by Arthur Kent, dismantling the film "Charlie Wilson's War". Not that it will dent the film's popularity, but Kent, who was there in Afghanistan as a television reporter, says in the article headed "Charlie Wilson's Whoppers" that the movie is a crock and further that it uses footage and his voiceover without credit or compensation.

Kent, who was known more during a brief period of notoriety as the "Scud Stud" of the first Iraq war, has had a long and career as a TV journalist (host of Dateline NBC 1989 - 1992) and war correspondent. In the film, towards the end when a montage of clips is used to convey the defeat of the Soviet army by the mujahadeen, armed covertly by Congressman Charlie Wilson and the CIA, Kent's narration is heard and footage is shown that he and his cameraman shot.

Much of the article deals with distortions of the filmmakers, but Kent is most vexed that his colleagues, who risked and lost their lives to get the documentary footage that is used so lavishly in the movie, go without credit:
Charlie Wilson’s War isn’t the first Hollywood picture to choose myth over substance and it won’t be the last. But the callous ease with which these millionaire moviemakers pillage the archives for their fable is a tendency, in Tinseltown, that factual filmmakers should take measures to redress.

I know a lot of moviegoers who sat through the credits of Charlie Wilson’s War just to see who recorded the battlefield footage. So who gets screen credit? Networks and news agencies and image archives — an almost indecipherable cluster of logos and bugs and acronyms.

But these gripping sequences aren’t the work of companies, they were filmed by men and women. Some were professional freelancers, others adventurers and daredevils. Many were young Afghans striving to document their country’s resistance to foreign oppression. Nearly all were underpaid and they frequently risked their lives. Yet their contribution to the historical record languishes without proper acknowledgement,as the makers of Charlie Wilson’s War so disgracefully demonstrate.

Kent goes to some pains to point out some of the more glaring shortcomings in the film's continuity, emphasis and historical accuracy as well as offences against his copyright. Given that he fought and bested NBC in a settlement and wasn't afraid to chase bandits into the Afghan hills, it seems quite likely that director Mike Nichols and the film's producers will be hearing from his lawyers.
Tweet

As someone who has FIRST hand knowledge of working with the weasles in Tinsel Town, all I have to say is "Good luck Arthur"

The first rule in Hollywood is there are NO rules. They will screw with you an intensity that you cannot even fathom.

The same selfish trend seems to pop up at companies in all media, from magazines to Hollywood: demanding respect and compensation for copyright owners only as long as they themelves are the owners.