Magazine advertising revenue in Canada grew 5.3% in 2007 versus TV, newspapers, radio and out-of-home combined, which grew 1.6%, according to data compiled by Magazines Canada. Magazine ad pages grew 3.2%, the national association said in a release.

Long term average annual compound revenue growth from 1999 to 2007 indicates that magazines grew seven per cent per year vs. 3.7% for other major media combined (as above).

“The country’s most sophisticated and successful advertisers continue to increase investment in magazines as an important component of the magazine mix”, said Gary Garland, Executive Director, Advertising Services, Magazines Canada. “The top 100 magazine advertisers in Canada increased spending by 10 per cent in 2007. Not surprisingly, advertising revenue grew across a broad array of product and service categories as well as editorial categories in 2007.” 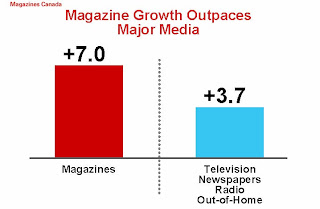 But if Canada Post had not raised rates by ... what 60- 70% during the same period, we might have kept some!