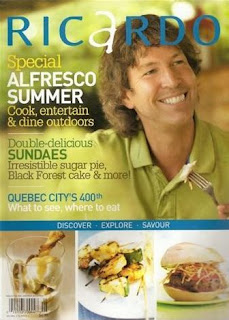 The English edition of food magazine Ricardo, has been suspended by its publishers, Les Editions Gesca of Montreal. The magazine's namesake is celebrity chef Ricardo Larrivée.


The English edition of the magazine was launched in November 2006 and published six times last year. Apparently, the French edition will continue and the related TV show, Ricardo & Friends, will also carry on, according to a story in the Ottawa Citizen which quoted an unnamed source saying there were insufficient subscriptions to continue.

"Due to internal reasons, we have to interrupt for an undetermined period the publication of the (English) magazine, but we hope to publish again in a near future," says Genesca chairman and publisher André Provencher, in a letter addressed to "managers and media planners."

"In the meantime, Ricardo & Friends TV show will continue to be broadcasted on the Food Network, and in Spring 2009 Ricardo will launch his new book in English. I also want to specify that the French version of Ricardo magazine, which is reaching out to an increasing readership since its beginning in 2003, will still be published to the great satisfaction of its faithful readers."

I ordered a gift subscription for the English edition of Ricardo in November 2008. It was never delivered and I am still trying to get my money back. Editions Gesca is ignoring all my correspondence, and I can't get through to the subscription desk (in English, anyway) on the phone. Needless to say I have not renewed my own subscription to the French version. No wonder the English version folded!