Masthead marks the launch of its final print issue 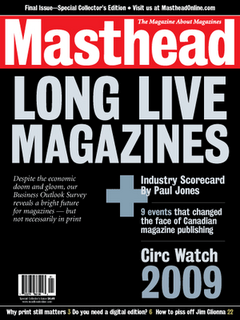 A friend tells us that Masthead magazine's final print issue was launched last night with an event at a west end pub in Toronto. Over complimentary Swedish meatballs, sausage rolls and chicken wings (sponsored by CDS Global, a consistent Masthead advertiser), everyone drank and talked about how bad everything is for magazines right now.

Marco Ursi, the editor (who is carrying on as editor of the online version) characterized Masthead as the Maclean's of the magazine world. Publisher Doug Bennet hinted that Masthead might be reincarnated in a new form one day, and then distributed the final "collector's item" issue.

I didn't quite characterize Masthead as the Maclean's of the magazine world. Rather, I said that when I was studying journalism at Ryerson, Masthead was spoken of in the same breath as magazines like Toronto Life, Chatelaine and Maclean's. A fine distinction, I guess, but an important one.

You missed a good party, D. B.