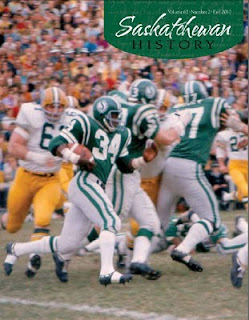 Timed to come out on the team's 100th anniversary and serendipitously on the eve of the team's appearance in the Grey Cup in Edmonton this Sunday, Saskatchewan History magazine has published an all-Saskatchewan Roughriders-themed issue.
According to a story in the Regina Leader-Post, the magazine  put 2,000 copies on sale at a price of $10 about two weeks ago, featuring photographs from the Saskatchewan government archives, which publishes the magazine. These include a picture of the 1934 Riders wearing leather helmets and some shots from the 1950s with quarterback Frank Tripuka demonstrating "correct football technique".

In their search for Rider content, magazine staff also unearthed recordings of the team's homecoming after the 1951 Grey Cup in Toronto.

"The team lost the Grey Cup (to Ottawa) that year, but they came back to this amazing reception from the people of Regina and Saskatchewan," said Charabin. "They wouldn't allow the players to leave the stadium until every single one of them got up to the mic and said something. Some of (the players) were feeling a little bit sheepish because they hadn't won, and yet they were being celebrated like this."

Fans can make arrangements to listen to the recordings at both the Saskatoon and Regina offices of the Saskatchewan Archives Board.

"To me, that's an amazing document to have," said [publication coordinator Nadine]Charabin, "and it speaks to the Rider tradition of people celebrating the team and being there thick or thin."