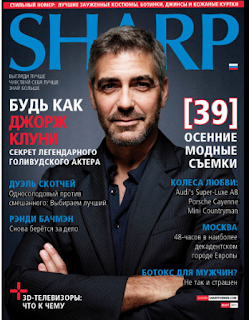 Sharp, the Canadian men's lifestyle magazine from Contempo Media is partnering with the Russian publishing house Smart Readers to produce a Russian edition with a circulation of 150,000. According to a story in Marketing, the magazine will look the same and will contain three-quarters of the magazine's editorial content.

According to Contempo, Sharp is the first Canadian magazine licensed to serve the international market. [editorial and creative director Michael] La Fave said that Sharp had been eager to license its brand and content to foreign markets since debuting in April 2008, but that the company was first approached by Smart Readers.
In a release, Dmitry Cherkasov, general director of Smart Readers, said that the men’s segment has been “insufficiently served” in Russia, prompting his company to begin seeking out a leading magazine capable of addressing the interests of the country’s male readers.
“We were off to the races pretty quickly,” said La Fave of the partnership, which took about three months to finalize.

Sharp's Canadian edition has a circulation of 146,000 distributed mostly through the Globe and Mail and claims a readership of over 382,000, according to a company release. Contempo is actively seeking other foreign markets, says LaFave.

“The benefit of being a relatively small company is that we like to move fast. I would say that over the next year we will be aggressively seeking opportunities like this one.”

Thank you for the coverage about our licensing of Sharp for the Russian market. We're pretty excited about it and hope the Canadian magazine industry is as well.

We're also at a point where we're investing more in editorial as we believe it's integral to our continued success.

That said, we don't receive a lot of good long-form pitches. We are willing to commit some money to this but don't really know how to get the word out.

Do you have any advice?

That's great -- good luck. Nice to see someone actually asking for long-form, these days. How much do you pay, Michael?

"We're also at a point where we're investing more in editorial as we believe it's integral to our continued success."

Sorry for the delay. I wasn't expecting to field requests for information here.

We have a budget of around $4,000 per issue for these features and the finished product would inhabit 6 pages with images.

That said, we're open to ideas. If there's a killer idea we want to pursue that requires more work, expenses and time then we'll adjust the budget accordingly.

Basically we're looking for great content that is relevant to Canadian men but can also be international in scope.

So is that $4000 for the package, including photos?

Not trying to be a dick, but you should break it down, Michael, if what you're trying to do is entice writers to step up and pitch. We need to know what we're getting into before expending a lot of time carving a decent query for a magazine that, to many, is still a relatively unknown quantity.

That said, you seem to be sincerely asking for advice. If that is indeed the case, in terms of getting the word out, I'd talk with a few of the established writers and get them to sign on to execute a few of your internally generated story ideas. Then, I'd encourage them to post their experience on, say, the TFEW listserv -- an online idea exchange frequented by many of the Toronto freelancers.

If you pay competitively, and are a reasonable person, the pitches will come rolling in.

Images are from a separate budget. Let's hear some good idea. My contact information is above.

Good for you, Michael. It's great to see a publisher step up to the plate like this. I'm sure you'll be on the receiving end of some very good pitches. Best of luck.