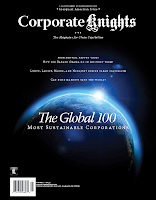 Corporate Knights, the Canadian magazine that promotes good corporate citizenship, is exporting it to the U.S. with the launch of its first issue (Summer 2011) aimed at the U.S. market; 100,000 copies carried as an insert in tomorrow's (July 14) Washington Post.
The magazine, which has latterly proclaimed that it stands for "clean capitalism", is holding a launch reception in the Canadian embassy in Washington at which the featured speaker -- introduced by Ambassador Gary Doer -- will be Jason Grumet, President of the Bipartisan Policy Center speaking on ‘‘Tapping North America's clean energy super-power potential.''
The summer issue releases the magazine's Global 100 Most Sustainable Corporations in the World (announced earlier this year at a conference in Davos, Switzerland.) The magazine has also, for 10 years, run an awards programs about the best 50 corporate citizens in Canada and last week gave former Newfoundland Premier Danny Williams its 2011 Corporate Knights award of distinction.
Corporate Knights has a total quarterly circulation of 108,000 copies in Canada, including 95,500 to select subscribers of the Globe and Mail. The magazine was founded in 2002 as an independent voice for humanizing the marketplace by highlighting good policies and practices. Its definition of clean capitalism is "An economic system in which prices fully reflect social, economic, and ecological opportunities and costs and actors are clearly aware of the consequences of their marketplace actions."

Finally, an issue that I am passionate about. I have looked for information of this caliber for the last several hours. Your site is greatly appreciated.