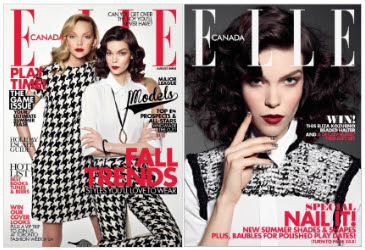 The struggle over the selling of magazine covers seems to have been all but lost, at least at one of Canada's largest consumer publishers, TC Media. The current issue of Elle Canada has a standard cover, immediately followed by a second one that is an ad for Sally Hansen nail polish. It features the same cover model (Meghan Collison), the magazine logo and an indistinguishable cover type treatment. There is no label indicating that the second cover is a paid ad. And both the main cover and the ad were art directed by Elle Canada art director Beatriz Juarez, edited by fashion editor-in-chief Denis Desro and photographed by the same photographer Jean-Claude Lessier.
The cover seems to transgress both the letter and the spirit of the industry guidelines that are intended to ensure that the separation of editorial content and advertising images must be transparent to the reader.

SEEMS to? "We've already established WHAT you are madam...now we're merely haggling over your price."

Perhaps I'm being too cautious; I said "seems to" since the guidelines are open to interpretation. Even though Transcon was involved in the task force that drew up the guidelines, the company apparently ignores them.

Anonymous 2: I think the difference from "flapvertising" is that in this instance the magazine's logo, editorial staff and design are used so directly to sell a particular product.

On the duo cover: How did the first ‘L’ in ELLE get get pushed over so far to the right? E LLE.

It's just another example of TC changing the rules as they see fit.

With decisions such as this simply to increase revenue over the short term, magazines will continue and hasten their downward spiral.

What's the best way to further destroy magazines? Let the marketers and the MBA's run the business.

I doubt very much there is a single soul there who has an mba.

Transcon (or whatever they are calling it these days) has suffered from the same problems for years. The magazine division is run out of Montreal (where magazines have been protected by the fact that the Quebec audience reads French and therefore are not interested in the slew of English magazines that are quite simply much better magazines).
So the Montreal-based management actually think they know what they are doing (based on their "success" producing French language magazines).
All the while they have left the Toronto-based businesses to run under staffed, under funded and quite honestly, (if you look at the current publishers still there)
badly underbrained.