Rogers Media to "reimagine" Next Issue subscription service as Texture

Next Issue Canada, the two-year-old Rogers Media all-you-want magazine subscription service, is being rebranded and repositioned as Texture starting Thursday. According to a story in the Globe and Mail, Rogers is following the lead of its U.S. partners, a consortium of publishers including Condé Nast Publications Inc., Hearst Corp., New York-based private equity firm Kohlberg Kravis Roberts & Co., Meredith Corp., News Corp. and  Time Inc. The consortium presents Texture as "a completely reimagined magazine experience." 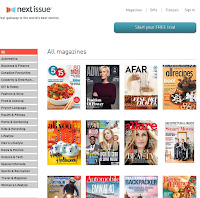 It moves the service -- which has more than 100,000 subscribers and has enjoyed a bigger relative uptake than in the U.S. --  from its positioning to date as an electronic simulation of a traditional "magazine stand". It puts the emphasis more on digital content and the way readers make use of it -- much different than from being a "flip book" or pdf online version of the traditional Rogers publications as well as more than 100 U.S. titles.


“It was a great opportunity for us basically to go out and say, whatever preconceived notions you might have about magazines, about digital magazines, about this product itself, we continue to evolve and we continue to innovate,” Steve Maich, senior vice-president of publishing for Rogers, said in an interview last week at his Toronto office. “So give it a second look.”

Digital readership still remains only 18 per cent of circulation for Rogers.


"Print still has a devoted following. But printing and delivering copies is often a money-losing exercise, so there is a business case for shifting some paper loyalists to tablets and smartphones.

"Texture’s greatest promise is its ability to attract new readers: 70 per cent of the app’s users have either never subscribed to a Rogers magazine or had let their print subscriptions lapse. Another key advantage is that it allows Rogers to collect what Mr. Maich calls “an absolute tsunami of data” on individual readers’ tendencies. Making sense of the raw numbers is “a much bigger engineering challenge than people imagine,” Mr. Maich said, but as Rogers learns to harness the data, it will yield page-by-page feedback to help shape story decisions and sell ads.

“Everything that speaks to engagement are numbers that we want,” he said.

In addition to improvements in search, advanced access and curated topics, Texture will also, at least in the U.S., have an editorial component, provided by an expanded editorial team led by publishing veteran Maggie Murphy.


"With over half of a million of the best articles and stories available, Texture feels it is imperative to add a human touch to the service that provides a unique view of today's important and trending topics," said Maggie Murphy, editorial director, Next Issue Media. "Auto-populated recommendations from data driven engines are valuable, and we make use of them, but we also think there's an element of trust that happens when your best friend shares their latest favorite article or recipe with you. We want to be that best friend to the reader."