Maisonneuve magazine, Friday night was named magazine of the year (for the third time since 2004) at the National Magazine Awards. In addition the national quarterly magazine based in Montreal won four gold and 1 silver medals.

The gold awards were for health & medicine (“Worth the Risk” by Alison Motluk), photojournalism & photo Essay, and best new magazine photographer (both for “The Maidan” by Marta Iwanek). The silver was for best magazine cover (“TV We Hate Issue”).

The jury said of the magazine


“Maisonneuve fulfills its bold mandate of ‘banishing boring,’ clearly striving to engage, inform and inspire. From its refreshing and imaginative art direction to its passionate editorial voice, the magazine feels like its constantly evolving, yet at the same time seems to connect with a sense of familiarity with its readers.”

Honorable mentions for magazine of the year were Canadian Geographic, Caribou, and Nouveau Projet.

Multiple winners of awards were: 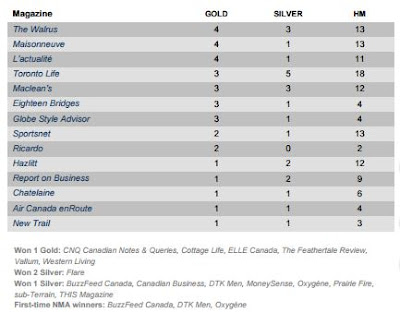 Gold awards highlights (a complete list of gold, silver and honorable mention awards is available here)
The Foundation Award for Outstanding Achievement was awarded to Kim Pittaway, an award-winning writer, former Chatelaine editor, teacher and mentor, recognizing her career contribution to Canadian magazines and her inspiration to creators. Read more about Kim Pittaway and the Outstanding Achievement Award at magazine-awards.com/oa.


Other highlights and details: