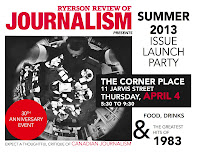 This event also marks a change of circulation model for RRJ, which has been publishing two issues annually and starting next year will be publishing an expanded annual, supported by an expanded online presence.

In a posting on the J-source site, the chair of the journalism faculty, Ivor Shapiro, who also acts as publisher of the magazine, announced that it had become too expensive to produce in its current form.


“The RRJ's always run in the red. There's always been a net cost to the school and it's growing substantial,” he said. “So when a particular activity consistently and predictably produces a net cost, you have to look at that and say, 'Is there another way of doing this?' And I think this a better way of doing it.” Shapiro said the RRJ will potentially cover its costs with the move.

The per-issue cost of publishing the magazines has been about $27,500. The media industry probably spills more than that , yet the RRJ has always had to struggle. A typical issue has been between 72 and 88 pages (the most recent is 88) and each issue has a masthead staff of approximately 15 students who choose to do the project(s). Professional help is provided -- for instance in art direction (the current art director is Tim Davin) -- and professionals from various places are paid a small honorarium to handling editors.

The magazine relies on advertising -- really sponsorship -- from various media concerns, large and small, a hand which some may have felt bitten when those sponsors were profiled. The magazine's faculty advisors push students to ask some very hard questions and publish the sometimes unflattering answers.

If that doesn't motivate you to attend the event, consider the $3 pints and the music of 1983, in honour of the year RRJ was launched.