Two well-known literary writers from Montreal -- poetry mostly -- have been swept up  and named in the sexual misconduct allegations now swirling around Concordia University. Both Dave McGimpsey -- until recently a contributing editor to the litmag Joyland -- and Jon Paul Fiorentino -- also a contributor to Joyland and at one time editor-in-chief of Matrix have apparently been relieved of their part-time teaching gigs, at least while Concordia conducts a wide-ranging investigation.

Joyland responded to reports that the two were under investigation by saying it would remove Fiorentino's work from the magazine's archive, according to a story on CBC.ca.


In January, writer Mike Spry published an essay describing a toxic atmosphere within the [creative writing] program. Spry has undergraduate and graduate degrees in English literature and creative writing from Concordia. In his essay, Spry described widespread sexual misconduct without naming individuals. His essay was shared widely, and within days, Concordia's administration took several measures in response. It promised to launch a third-party investigation.

Avenue Calgary magazine is marking 15 years of celebrating the best restaurants in Calgary and environs. The Best Restaurants Issue is on newsstands.


"In the 15 years that Avenue has been publishing a Best Restaurants list, the dining scene in the city has grown tremendously in terms of quality, diversity and creativity. This issue celebrates the excellent work that the city's chefs and restaurateurs do every day and applauds their ongoing commitment to maintaining Calgary's status as a world-class food city," says Jennifer Hamilton, executive editor of Avenue.

Friday is the deadline for CSME Editors' Choice Awards entries

There are only a few days for entries into the Editors' Choice Awards, presented by The Canadian Society of Magazine Editors (CSME). Submitting is free with a CSME membership, and each submission enters you into as many as seven categories: the Small (under 50,000), Medium (50,000 to 99,999) and Large (100,000+) circulation categories, as well as the trade and custom magazine categories, each winner of which earns the right to use the Editors’ Choice Award logo on the magazine's cover for a year. There are also awards for best tablet, best website editorial, best front of book, the Jim Cormier Award for display writing, best art integration and the coveted editor of the year.

Unhappy news from publisher Michael Fox that the "difficult decision" has been made that the new spring issue of Garden Making magazine will be the last print edition.

"I’ve needed to conclude that the marketplace is not robust enough to provide sufficient revenue from readers and advertisers to continue to produce a magazine of the quality and scope that we’ve provided since 2010," said Fox in a note to advertisers and supporters. "We commission and pay for experienced writers and photographers, as well as quality printing. In fact, we have spent more than $1 million on gardening content in 33 issues (including our container gardening special). From 2010 to 2016 we published quarterly issues before reducing to three issues in 2017 and this final issue in 2018. But the revenues we’ve received do not cover all the expenses. Until now, I’ve personally plugged the gap, and cannot continue to do so."

The Garden Solutions issue begins to mail to subscribers this week and will be on sale in stores from March to June as well as online at shop.gardenmaking.com  Print copies  will be for sale at the TBG booth at Canada Blooms and at garden centres that order them.
Michael and Beckie "my business partner, wife and favourite editor" started the magazine from their home in Niagara-on-the-Lake in March 2010, following Michael's retirement from a long and distinguished senior management career at Rogers Publishing.
Related posts
Tweet Following the Florida school mass shooting, former Toronto mayor David Miller complained to Shoppers Drug Mart about a gun lifestyle magazine offered on its newsstands (one of the most important single-copy outlets in Canada). His tweet, as reported by the Toronto Star:


“Really @ShopprsDrugMart , promoting semi-automatic weapons at our local shop? How about you stop.” Miller tweeted about Recoil magazine.

Three days later, the title was pulled from the racks and Shoppers tweeted back:


“Hello David, thanks for sharing your concerns," the company said. "After hearing about this, we've decided to remove this issue from our stores. We are working on pulling all copies in circulation and will not receive any further shipments of this publication." 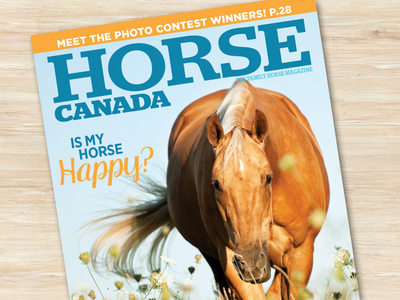 Horse Canada magazine, published by the Horse Media Group, has unveiled a new masthead, its first redesign since 2001. The new design was done by Bonnie Summerfeldt.

The mandate was that It needed to be easily read at a distance, attractive to adults and children, and also show it's authority as a trusted source of equine health info. 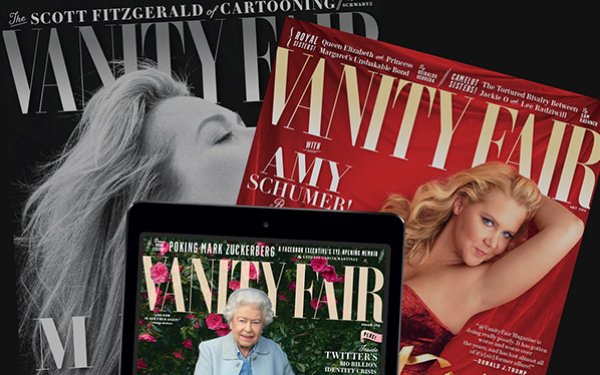 
The changes were part of a scramble to cultivate a sustainable digital brand, reported  Publishers Daily.
Tweet

New digital literary magazine TOK to be
launched in April

A new digital magazine -- TOK -- is to launch officially in April. It's an outgrowth of Disapora Dialogues, which has a long record promoting emerging writers, playwrights and artists.

The magazine project will rely at first on fiction, creative non-fiction, poetry and drama created under the auspices of the Diaspora Dialogues mentoring programs.  The new venture is being led by Helen Walsh, until recently the publisher and president of the Literary Review of Canada, and the founding director of Spur, a national festival of politics, art and ideas.


"We see TOK as the logical extension of the work we’ve done over the past decade and a half. In a world whose reading habits have changed, the publishing landscape irrevocably altered, we’ve designed TOK to be a fluid, responsive network. A way to showcase and support writers across backgrounds and styles. And we’re committed to collaborating with partners across literary, artistic and community realms, to do our bit in fostering a non-zero-sum culture." 
A complete program is live now at
http://magnet.magazinescanada.ca/schedule/.

New this year are "global intensives" with FIPP President James Hewes, what makes the BBC's Good Food brand so successful across platforms from publishing director Chris Kerwin, and MPA's President Linda Thomas Brooks talking about what makes magazines the most powerful medium for advertisers.

Especially for arts, literary and cultural magazines is the Arts & Literary Magazines Summit, a full-day deep dive into the inner workings of cultural magazine publishing from coast-to-coast.


Magazines Canada is offering rebates for MagNet expenses to members in good standing that have annual circulation under 25,000, covering over 50% of travel costs and 50% of session fees. Bursaries are limited, so visit magazinescanada.ca/program/skills-rebates to apply now!

The Alberta Magazine Publishers Association (AMPA) has announced the achievement award finalists for 2018. These awards recognize vision and  innovation demonstrated by individuals.

Finalists for Magazine of the year are:

Finalists and winners will be celebrated at the 2018 Alberta Magazine Awards Gala on Thursday, March 8 at the Carriage House Inn in Calgary. 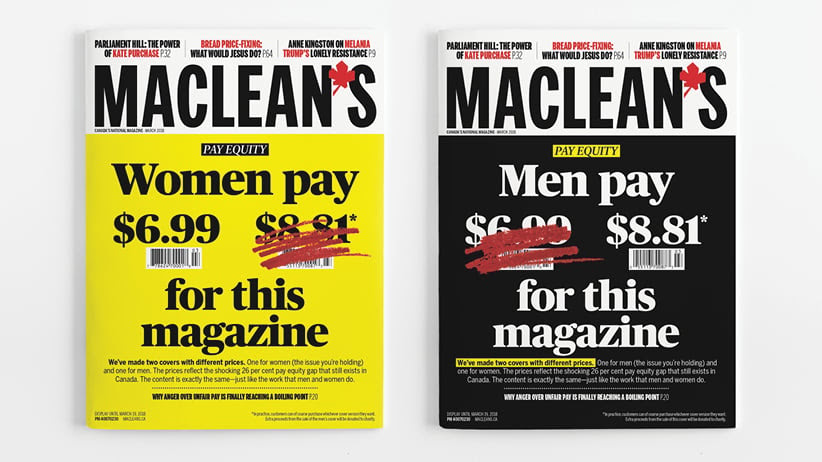 If the mark of excellent editing is to involve readers, then the current newsstand issue of Maclean's achieves both. The magazine has two different gender-specific covers intended to provoke conversation about the roughly 26% pay gap between men and women. One cover price is $8.81 for men; the other $6.99 for women. Readers can pay whatever cover price they want


"After years of stasis, pay equity is having its moment as the next beat in the cadence of the #MeToo movement. Our hope is that these dual covers stir the kind of urgent conversation here that is already happening elsewhere around the world."

The initiative is a real credit to the editors and the art directors and we look forward to the reader response.

Leadership of Newsweek shown the door

Wow. Just wow.
The top 2 editors at Newsweek and two senior writers have been fired, according to BuzzFeed's Craig Silverman.


Bob Roe, the editor in chief, and Kenneth Li, the executive editor, were both let go today, along with senior politics writer Celeste Katz and senior writer Josh Saul.

Sources also tell BuzzFeed News that staff in the magazine's New York office are withholding work until they get more information from company executives.

This follows a recent raid in the New York offices of parent company Newsweek Media Group by the Manhattan District Attorney; BuzzFeed News revealing that a top editor, Dayan Candappa, was fired from a previous job over sexual harassment allegations; and that sister publication the International Business Times has been engaging in ad fraud.

Quote, unquote: Advertising will decline 30% in next 5 years

“We are so disrespecting people’s time that they are spending more and more time in advertising-free environments.... We don’t value their time. You’re asking me to give you my time for less than minimum wages, which is not worth my time.”

--  Publicis Groupe’s Rishad Tobaccowala predicts that  the amount of advertising reaching consumers over the next 5 years may decline 30%. [He spoke during the opening session of CIMM’s Cross-Platform Media Measurement & Data Summit in New York City Thursday afternoon.] From Media Daily News

Mag world view: Back to a letters section; Alphabet's bilions; 'what makes a community?; Readers are not lists