The Quebec Magazine Awards (Grands Prix du magazine), which have been held each year since 1991, will not be held this year. Directors of the association says in a message on the website of the Quebec Magazine Association -- l’Association québecoise des éditeurs de magazines (AQEM) -- that the focus is on urgent advocacy issues, principally trying to reverse the "exorbitant" blue box fees being proposed by the Quebec provincial government. Quebec publishers are facing charges for recycling of magazine paper that is seven times that in neighbouring Ontario.
The association said that, when the awards return in 2014, they will be open to work published in either 2012 or 2013.
Related posts:

Faced with the possible (or likely) end of Saturday delivery by the USPS, usually used by weekly magazines in the U.S., Bloomberg Businessweek has struck a partnership with newspaper chain Gannett for alternate delivery to an additional 100,000 subscribers in 15 markets.

The alternative delivery doesn't save the magazine money, neither does it significantly change the production and delivery schedule, nor does it cost more than the post office. President Paul Bascobert said that wasn't the goal.


“We wanted to improve the service, its critical they [readers] get the news as soon as possible, especially in light of the possible USPS Saturday shutdown” he tells AD.

Many publishers, including a consortion of magazines in Canada, have looked closely at alternative or "expedited" delivery, using already existing networks of newspaper delivery contractors. One of the benefits is the ability to polybag the magazine and make money by carrying inserts.


“With expedited morning delivery we significantly shorten the time from the printing press to the doorstep” says Bascobert. When asked if other publishers should get on board with expedited morning delivery he emphatically says, “I don’t know why other publishers haven’t done this already. To me, it seems like a fairly natural thing to think through.”

Henry Luce is probably spinning in his grave. TIME magazine has keyed its coverage of this week's two days of oral arguments at the U.S. Supreme Court concerning gay marriage with an edgy foldout cover. According to Mashable, the magazine has been trying to push for more provocative covers lately. The cover features a gay male couple and (separately) a lesbian couple in a full-on mouth-to-mouth embrace. The arty black and white photos are by Peter Hapake.

Cellier magazine, a custom publication produced for the Société des alcools du Québec (SAQ) by TC Media, has been redesigned and will now be published 8 times a year (previously 6) with an expanded circulation of 350,000 copies. The redesign features a new logo Cellier-New Arrivals and the publication will not only be distributed in SAQ branches across the province, but also as an  iPad edition. 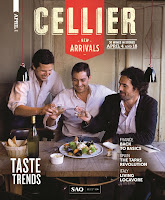 “The SAQ has trusted us for a number of years now to create a custom-content magazine and guide its customers as they explore the world of wines,” said Lise Paul-Hus, Group Publisher and VP, Consumer Solutions Montreal for TC Media. “We are pleased to have had the opportunity to work closely with the SAQ team on this much-anticipated redesign of Cellier – New Arrivals, which will now offer  a  more interactive approach, with greater frequency of publication and higher circulation.”

Local advertisers in the U.S. are proving slower to move from traditional (e.g. print) ad spending than are advertisers overall. According to a forecast by BIA/Kelsey (reported by eMarketer) digital in local ad markets -- especially with the influence of mobile -- will continue to grow and by 2017 will make up about $148.8 billion. Digital will account for slightly more than one-quarter of the total.


The data shows that among the most efficient magazines in Canada -- based on how many readers every copy of the magazine reaches -- are Canada's History and Outdoor Canada. . Here are the top 20 titles in terms of readers-per-copy (RPC):